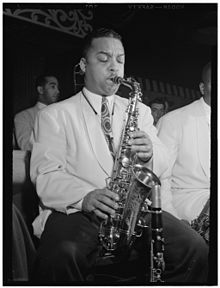 Russell Procope, an excellent altoist and clarinetist, became well-known during his Duke Ellington years as a New Orleans-style clarinetist. After eight years of violin studies, he switched to clarinet and alto. Procope recorded with Jelly roll Morton in 1928. He also had significant stints with Chick Webb (1929-1931), Fletcher Henderson (21-1934), Tiny Bradshaw (1934-1935), Teddy Hill (35-37) and Willie Bryant (1929-1931). But it was in the John Kirby Sextet (1938-1943), during which he played only alto, that Russell Procope’s best work was. He performed brilliant solos and a tone that perfectly matched the music. After serving in the Army (1945), Procope joined the Duke Ellington Orchestra in 1946. He remained there (except for a brief period with Wilbur DeParis in 1961) until Ellington’s passing in 1974. Johnny Hodges was present so Procope did not have many alto solos. He served instead as a section player, occasional clarinet soloist, and a clarinet soloist. Procope’s Ellington years were secure and happy, but he was often underutilized. In the 1970s, Procope was a member of Brooks Kerr’s group. Allmusic