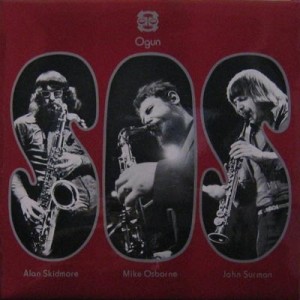 John Surman and Mike Osborne were three of the most influential saxophonists of British jazz in the 1960s and 1970s. They had been performing and recording together for many years before they founded the S.O.S. trio in 1973. The trio were all members of the Mike Westbrook concert band (appearing in both 1969’s Marching Song volumes). Surman and Osborne had also been part of Westbrook ensembles since 1962. Chris McGregor’s Brotherhood of Breath appeared on the Brotherhood’s 1970 debut. The dates that Surman and Skidmore arranged were crucial in the establishment of S.O.S. Surman, a baritone and soprano saxophonist, led a group that featured altoist Osborne in the late ’60s. Osborne and Skidmore also appeared on Surman’s 1970 album How Many Clouds Can You see?. They were also part the ten-piece line-up that performed under Surman’s direction on the German NDR Jazz Workshop television show in 1969. This was documented by the Cuneiform label’s 2011 CD/DVD set Flashpoint -April ’69. Surman and Osborne also appeared on the TCB B-side, an album by Philips’ Alan Skidmore Quintet in 1970. According to Bill Shoemaker’s liner note to the S.O.S. Cuneiform released the two-disc collection Looking for the Next One in 2013. It was the original idea of the trio by Surman, who suggested it to Alan Skidmore after Skidmore had been injured in an automobile accident in 1972. S.O.S. S.O.S. was formed in April 2001 and began rehearsals. The trio then toured Europe in the fall, as the trio had other commitments. S.O.S. is a trio that is best known for their saxophone playing. Some view S.O.S. as being a precursor of the World Saxophone Quartet (both founded in 1977), however, the trio was actually multi-instrumental, with Surman playing keyboards and synthesizers (as foreshadowed in his 1972 solo album Westering Home and foreshadowing his prolific later output for ECM), while Skidmore playing drums. 1974 was a significant year for S.O.S. as the group created its distinctive identity, combining avant jazz, free-improvisation, electronics and even classical elements in live performances that ranged from club and festival dates to a residency with the Paris Opera. The trio recorded the eponymous SOS album, which was released later in 1975. The group released one album during their existence. S.O.S. S.O.S. recorded additional studio sessions until September 1975. Tony Levin, a guest drummer from the Alan Skidmore Quartet, joined the group that month. However, the difficult economic climate in Britain and Osborne’s health issues led to the group’s dissolution by 1976. The trio’s limited recorded evidence was supplemented with the 2013 Cuneiform set Looking for the Next One. This featured a 1974 live recording taken at the Balver Hoehle Jazz Festival, Balver, Germany, and London studio sessions between 1974 and 1975, and Levin’s September 1975 tracks. Allmusic