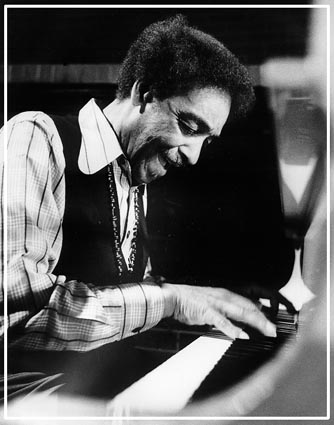 Argonne Thornton, who in the late 40s changed his name from Sadik Hakim, had a unique boppish style. He played dissonant lines and used repetition to build suspense. This was a distinct style that stood out among the many Bud Powell impressionists. His playing evolved into a more traditional style later in his career. Hakim studied music with his grandfather, and began performing at local gigs in Minnesota. After performing in Chicago for a while, Hakim was discovered by Ben Webster who hired him to perform in New York with his band (1944-1945). Hakim recorded with Webster, Dexter Gordon, and was part of Charlie Parker’s “Ko Ko” session. He also gigged with Lester Young from 1946 to 1948, appearing on numerous recordings with Pres. After his 1949 appearance with Slam Stewart, Hakim recorded with Webster and Dexter Gordon in the 1950s. He also worked with Buddy Tate’s Orchestra (1956-1960), and Lester Young (1946-1948). He spent the second half of his life in Montreal, performed frequently in Europe and toured Japan (1979-1980). Hakim recorded an album with Duke Jordan for Charlie Parker in 1962. He did not record as a leader for seven years. The next seven years saw him lead shows for SteepleChase and CBC. Storyville was his last stop in 1980. Allmusic