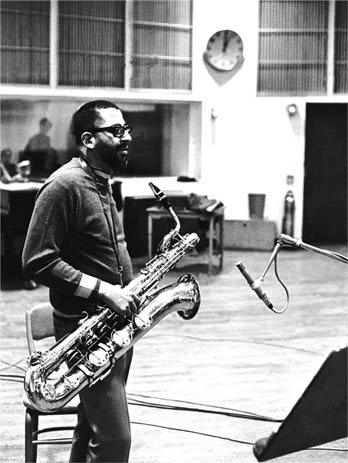 Sahib Shihab, born Edmond Gregory 23 June 1925, Savannah, Georgia, and died 24 October 1989, was a jazz saxophonist (baritone and alto), and flautist. At the age of 13, he played professional alto saxophone for Luther Henderson. He went on to study at Boston Conservatory and play with Roy Eldridge. In the mid-forties, he was the lead alto for Fletcher Henderson. He converted to Islam in 1947 and changed his name. In the 1940s, Shihab was a member of Thelonious Monk. He also had the opportunity to appear on numerous recordings by Kenny Dorham, Art Blakey and Benny Golson during this time. It was a significant moment for Sahib that he was invited to perform with Dizzy Gillespie’s big band in early fifties. After becoming fed up with the racial politics of America, he traveled Europe in 1959 with Quincy Jones and eventually settled in Scandinavia. He was a composer for TV, film and theatre and worked at Copenhagen Polytechnic. He joined The Kenny Clarke–Francy Boland Big Band in 1961 and was a vital part of the band over the twelve years that it operated. He married a Danish woman and had a family in Europe. However, he was still a conscious African American who was sensitive to racial issues. After a three year hiatus in 1973, Sahib returned home to the United States. He worked as a session musician for pop and rock artists, and also did some copywriting for local musicians. Sahib spent his last years in New York and Europe, where he played in a successful partnership alongside Art Farmer. He died in Tennessee. [2] Art Kane photographed Sahib in 1957 in his A Great Day in Harlem photo. Text contributed by users is available under Creative Commons By–SA License. It may also be available under GNU FDL.