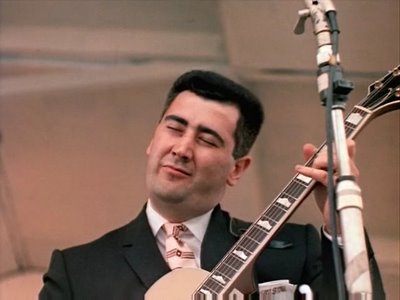 Sal Salvador, who was once the head of the University of Bridgeport’s guitar department, was a versatile guitarist. His single-string style was influenced by Charlie Christian’s music and was enhanced by extensive study of guitar technique. Salvador spent many years researching, playing and analysing guitar technique. He eventually wrote several books on the subject, including Sal Salvador’s Chord Method for guitarist and Sal Salvador’s Single String Studies for guitarist in the ’50s, ’60s. In his teens, he became interested in jazz and started playing professionally in Springfield in 1945. At the end of the 1940s, he worked in New York with Terry Gibbs. He then joined Stan Kenton’s orchestra in 1952. Salvador was with Kenton from the beginning of 1953 until his death. He also appeared on the New Concepts of Artistry in Rhythm Album. He was a leader of bebop groups that included Eddie Costa and Phil Woods. Salvador was featured in Jazz on a Summer’s Day. He also led a large band in the late ’50s to early ’60s. In the early 1970s, he was part of a guitar duo with Alan Hanlon and began recording as a leader in the latter half of the decade. In the 1980s, he reformed his big band and was appointed to the University of Bridgeport. Salvador led recordings for Blue Note (1953), Capitol, Bethlehem, Decca, Jazz Unlimited, Dauntless (1963), Bee Hive, GP, and Stash; he died September 22, 1999, at the age of 73. from http://www.allmusic.com