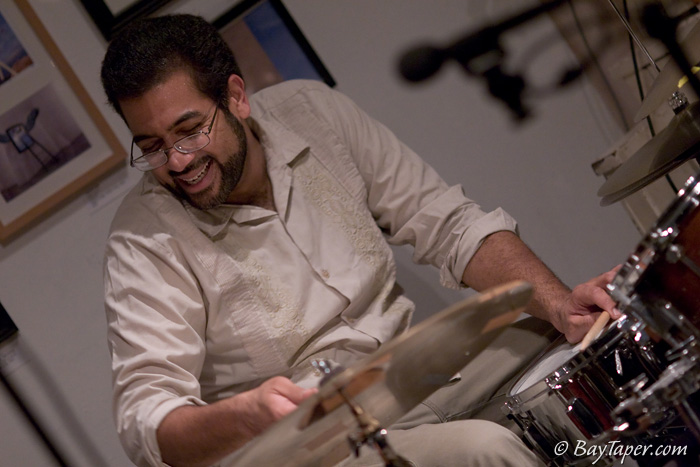 Sameer Gupta is renowned for being one of few percussionists who can simultaneously represent Indian classical music on tabla and American jazz on drumset. He performed at Lincoln Center NYC and Birla Auditorium Kolkata. Sameer was originally a jazz drummer who learned from his peers at the Harlem NYC and San Francisco schools of jazz. His love for tabla and his own interests led him to Pt Anindo Chatterjee. He is now a committed disciple of the great maestro, although his first few years were spent learning from Ustad Zakir Hussain. Sameer is also co-founder and Artistic Director at Brooklyn Raga Massive, a non-profit collective. He currently resides in Brooklyn, NY and is involved in teaching, curating and performing through many institutions, including the Outside (In)dia Series presented at India Center Foundation, Brooklyn Raga Massive and Carnegie Hall’s Global Encounters. Gupta has taught workshops on Indian music and cross-over drumming at Berklee College of Music, Boston and The Jazzschool in Berkeley. Sameer has shared the stage with many musicians, including Casey Benjamin and Martha Redbone, Awa Sugho, Falu Khan, Rez Abbasi. Gupta has a solid reputation as a unique musical voice today, combining traditional and contemporary improvisational styles from his American and Indian heritages. From avant-garde jazz to bebop, European classical percussion and North Indian classical tabla, there is something for everyone. Gupta continues to create and perform music with a multi-cultural perspective, which now spans many continents. from https://sameergupta.com