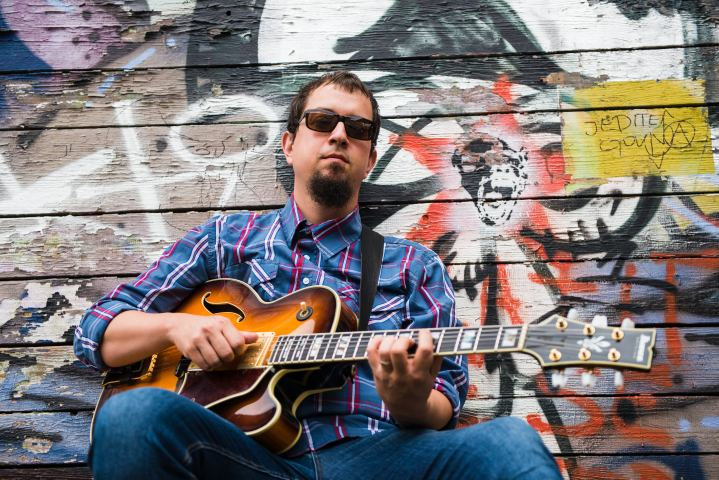 SAMO SALAMON has been called “one of today’s most talented and intriguing young composers and guitarists” (AllAboutJazz). He was also selected by Guitar Player as one the 10 hottest new guitarists around the globe. His musical journey began in Maribor, where he studied classical guitar. He was living in New York City with John Scofield, a jazz master who he had been friends with for many years. He was a guitarist and took lessons from well-known players like Rudy Linka and Tim Brady. He has recorded 16 albums and composed over 160 compositions for the labels Fresh Sound New Talent, Splasch Records (Italy), Steeplechase Records(Denmark), Sanje Recordings(Slovenia), and Goga Recordss (Slovenia). He has recorded and played with many international musicians, including John Scofield and Paul McCandless, John Hollenbeck and Drew Gress, Tony Malaby and Drew Gress, Nguyen Lee, Drew Gress and Tony Malaby, Mark Turner, Mark Helias and Tony Malaby, John Hebert and John Hebert, John Hebert and John Hebert, John Hebert and John Hebert, John Hebert and John Hebert, John Hebert and Danilo Gallo and Dejan and Nino Mureskic, Nino Mureskic, Nino and Robert Jukl, Jure Pukl, Nino and Aljosa Jeric, Nino and Nino Mureskic, Nino and Nino and Nino and Nino and Nino and Aljosa Jeric and Aljosa Jeric and Nino and Nino and Nino and Nino and Nino and Nino and Nino Mukl and Jure Pukl and Jure Pukl and Jure Pukl and Jure Pukl and Aljosa Jeric. He was also a leader in the jazz etno band Ansasa Trio. In 2002, he released a CD under the title Ansasa Trio : Arabian Picnic. He released Ornethology in 2003 with his quartet (Achille Suecci, Salatore Maiore and Zlatko Kaucic). It was a highly-acclaimed album that received rave reviews in Europe and the USA. Ornethology received the highest rating (4 stars), in the Penguin Jazz Guide. It was also chosen by the Penguin Jazz Guide to be one of the 1001 best albums in the history of jazz (Penguin Jazz Guide – The History of the Music in the 101 Best Albums). Samo Salamon’s first European tour was in April 2004. He had a great new sextet with him, including Dave Binney (USA), Paolino Dalla Porta (Italy), Kyle Gregory(USA), Achille succi (Italy), and Zlatko Kaucic. They received great reviews from around the globe. The album Ela’s Dream, which was recorded during the tour, was released on April 2005 by the Italian label Splasc(h) Records. It received excellent reviews again and was named album of the Week on All About Jazz. The record also received the Penguin Jazz Guide’s highest rating (4 stars). End of 2004, Samo returned to New York and played in several jazz clubs (Detour and 55 Bar), and recorded two new albums as a leader alongside some of the most respected jazz musicians in the world. One with Tony Malaby and Mark Helias, while the other with Josh Roseman and Mark Helias, and one with Dave Binney and Gerald Cleaver. Samo Salamon Quartet : Two Hours was the first release on Fresh Sound Records in 2006. It received rave reviews in all major magazines, including Musica Jazz, Allaboutjazz, Downbeat and Musica Jazz. Fresh Sound Records released the second project in fall 2006 as Samo Salamon NYC Quintet – Government Cheese. Government Cheese, along with Ela’s Dream and Ornethology, received the highest rating (4 stars!) in the Penguin Jazz Guide. 2005 saw Samo embark on a longer European tour, with a new quartet that included Achille Succi (Italy), Carlo DeRosa (USA) and Tyshawn Srey (USA). The tour resulted in a new CD Samo Salamon’s New Quartet: Kei’s Secret, which was released on Splasch Records in 2006. This record only reinforced Salamon’s reputation as one of the most talented young composers and guitarists in jazz. Salamon began 2006 with the project (Michel Godard and Julian Arguelles), with a performance at Cankarjev Dom in Ljubljana. The recording of the concert was made and released on Slovene label Goga Musica in 2007 as Samo Salamon European Quartet : Nano. This record marked Salamon’s first collaboration with Michel Godard, the world’s best tuba player. Salamon also recorded another record that year with Michel Godard. This time, Salamon was joined by two other Italian virtuosos, Luciano Biondini, an accordion player, and Roberto Dani, a drummer. The Italian label Splasc(h) Records released the record as Samo Salamon European Quintet: Fall Memories in 2007. Two other excellent projects prove that 2006 was a fruitful year for Samo Salamon. Salamon went on a European tour in February 2006 with an outstanding lineup (Mark Turner, Matt Brewer on bass, and drummer Aljosa Jaric). Another album Mamasaal was recorded by the band. The album Mamasaal feat. Mark Turner was released in the latter part of 2008. The album was released in late 2008. The label Sanje released the album in 2011 as Samo Salamon Trio feat. Drew Gress