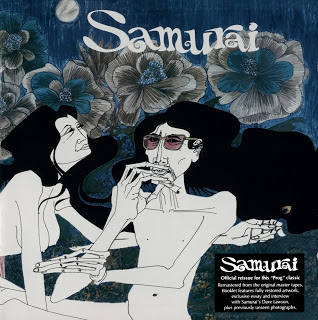 Samurai was known previously as Web. Web released three albums: Fully Interlocking (1968), Theraphosa Blondi (70), and I Spider (1970). The first two albums featured John L. Watson (American singer), and were released by Deram. I Spider was first released on Polydor, and Watson was replaced with future Greenslade keyboardist/vocalist Dave Lawson. Web was renamed Samurai and the band no longer recorded for Polydor. Instead, they were recording for Greenwich, a much less well-known label. It is difficult to find an original LP these day. However, you can always get a CD reissue (Akarma, Italy, had just reissued it). After this album, Samurai split up. It’s not surprising that they recorded for Greenwich, a very obscure and short-lived label. They probably didn’t have the funds to continue one. However, that didn’t stop Dave Lawson. Former members of the Colosseum, Tony Reeves and Dave Greenslade, joined by Andy McCulloch, ex-King Crimson and Fields drummer, brought in Dave Lawson. Greenslade managed four albums from 1973 to 1975 before he quit (just before punk rock was in). from therockasteria.blogspot