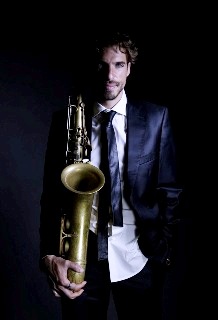 Samy Thiebault was born in The Ivory Coast. He follows a traditional route in Bordeaux’s CNR before being admitted to the prestigious Higher National Conservatory for Music of Paris as a jazz pianist in 2004. In 2008, he graduated. He also completes his musical studies and earns a master’s in philosophy at Sorbonne (2001). In 2004, he releases his first opus, “Blues For Nel” (Musicast). He considers the album a critical and public success. He releases his second album with the quintet “GayaScienza” in June 2007 (B Flat/Discograph, 2007. The group conquers a large public and receives high critical support. The “Coltranien” orchestra (The New Observer), presents in November 2010 an original and ambitious project: The Upanishad experiences »a suite of compositions for 11 musicians, inspired by Nietzsche’s and Baudelaire’s texts. Jackie Berroyer, an actor, is the narrator and takes part in the echoing of the music and poetry. The combination of the poetry’s richness, the freedom of the musicians, and the sound of an orchestra created a dynamic around the group as well as the saxophonist. He is present on France’s most important Jazz stages and draws a growing number of people who believe in him. The publication of “Clear Fire”, his new album on his label “Gaya Music Production”, marks the beginning of a new phase in the career of this artist who is always in search of the best. This new adventure focuses on rhythm and the many outside and internal dances that it contains. Samy’s contribution to the orchestration, the Maghreb’s traditional percussions (from which Samy is partly native), combined with a strong rhythmic, understanding the language and tradition of jazz, creates an original, organic sound material that is both meditative and meditative. We should also mention that Samy Thiebault has written regularly for theater and cinema. He wrote for the Festival of Avignon 2009, with the piece of Matei Vizniec L’histoire des ours Pandas »; for Edouard Tissot’s movie “En son absence” (October 2010); and for the movie of Yvon Martiano “Vivre! (September, 2009). He teaches saxophone and improvised music at the Conservatory of Choisy Le Roi since september 2010. from http://www.atoutjazz.com