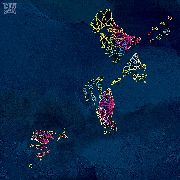 Rodolfo alchourron is a figure that holds a special place within Argentine music. He is known for both his intense production and his ability to create bridges between musical styles. He was born in 1934 in Buenos Aires and received a solid education in classical music. He became more interested in popular music later on, attracted to jazz but also tango and rock. He played in the jazz scene with such renowned musicians as Enrique “Mono”, Villegas and Leandro “Gato” Barbieri. He collaborated with Rodolfo Mederos, Astor Piazzolla, and Eduardo Rovira in tango. He is well-known for orchestral arrangements for Almendra and Miguel Abuelo, as well as Litto Nebia. He was also a familiar figure in Argentine folklore. He played the charango, and shared the stage alongside musicians like the percussionist Domingo Cura and the fusion accordionist Dino Saluzzi. Alchourron has been directing and founding a wide range of groups since the 60s. These included trios to large bands of 16 players. This is where Alchourron’s experiences with Sanata y Clarificacion, which dates back to the 1970s and 1974, can be viewed. The group, which included top-level musicians, suggested a musical interchange between rock and jazz that was quite unusual within the context of Argentina’s music at the time. Their first LP, “Sanata y Clarificacion”, was released in 1972 by the independent label Promusica. The album has a lot of space for instrumental improvisation, but is not tied to any soundtracks from movies made during that time period, particularly in Italy. The band released their second album in 1974 with some changes to the lineup. The record was simply titled “Sanata y Clarificacion Volumen 2”. It continues the original volume’s idea, intensifying the arrangements and the melodic lines and trying new approaches to jazz, rock, waltz, and tango. Instabilities in the local context and difficulties in promoting a project that lacked a commercial orientation led to the dissolution of the band the same year. Alchourron fled to the United States in 1978 and settled in New York. He continued his work as an arranger and composer. He returned to Buenos Aires in 1989, where he continued his musical activities until his death in 1999. Nine records are his legacy, along with many discographical appearances, and several books on composition, arrangement, and improvisation. Visit www.vampisoul.com