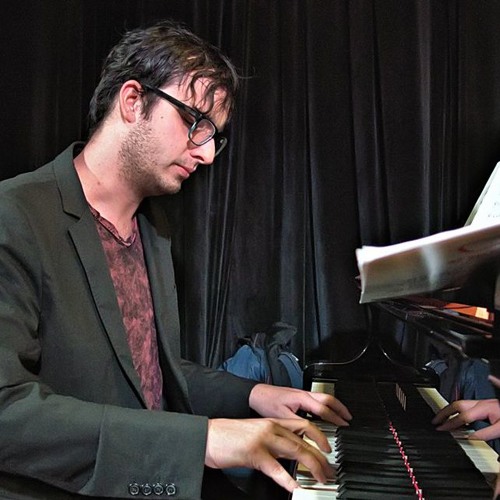 Santiago Bosch was born in Barquisimeto (Venezuela) in 1987. At the age of 9, he started studying piano after spending the first year of his life listening to music and being inspired by his father, the saxophonist Jaime Bosch. He received an education in classical music/piano instruction during that time. However, after two years of being inspired and influenced by his father, Jaime Bosch, he decided to quit classical school and dedicate himself to practicing at home and listening to the music of his favorite artists. He began composing music at age 15, and also played professional gigs. This experience was a major part of his music education. He earned a professor’s degree as a Music Education teacher from UPEL IPB University in Barquisimeto in Venezuela in 2011. He graduated Magna Cum Laude in 2015 from Berklee College of Music, Boston Massachusetts. He received a bachelor’s degree in Piano Performance Major. To cover tuition costs, he was awarded a full scholarship from Berklee. He was a bandleader and sideman during his time at Berklee. This included recitals, concerts, recordings, and trips. From 2014 to 2015, he was part of the Berklee Global jazz Institute. He was sponsored by Seguros Universitas, Venezuela’s most prominent and largest insurance company, during his first years at Berklee College of Music. He was chosen as the company’s Musical Ambassador. This meant that he was able to receive financial support to stay in the US for many years, and was invited to perform at important private events in Venezuela. He graduated Suma Cum Laude, Berklee College of Music in 2017, as a graduate student. He earned a Master’s Degree in Contemporary Jazz Performance from the Berklee Global Jazz Institute. He was awarded a Berklee full scholarship to help with the costs of this program. He currently resides in Boston, Massachusetts Professional Performances/artists/musical experiences He participated as a sideman and bandleader at the Barquisimeto’s International Jazz Festival, Venezuela, from 2006 until 2010. From 2006 to 2010, the festival featured many musicians and groups such as Jeff Berlin, Scott Henderson and Yellow Jackets. He was sponsored by the State Department of the United States to travel to the U.S. in 2010 as a cultural ambassador. He participated in musical and educational activities in Chicago, Nashville, and Washington D.C., including performances and master classes. His final concert was at the Millennium Stage, Kennedy Center Washington D.C. He also took part in important jazz festivals and venues, including the Millennium Stage, Kennedy Center Washington DC (2010), Barranquilla Jazz Festival, with Oscar Stagnaro Berklee(Colombia 2012), Heineken Jazz Festival, with Eguie Castrillo’s Berklee band, (Puerto Rico 2013,), Lincoln Center Dizzy’s Club Coca-cola (2016), the Dominican Republic Jazz Festival, with Terri Lyne Carynio (2016), the Puerto Rico Music Conservatory Jazz Festival, Sam Mineaienig, Jerry Bergonzi, Guillermo Kelin John Lockwood, John Lockwood, John Lockwood, Fernando Freitez Gassan and Carlos Averhoff Jr. from www.santiagobosch.com