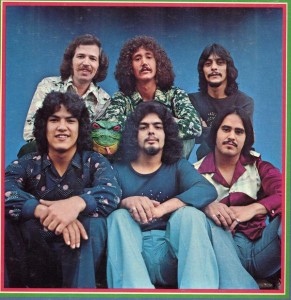 Sapo’s story begins with Richard Bean. He started playing sax at Junior High. He loved it so much that he started performing with various bands, including The Dynamics (with Carlos Santana), Wizardz with Abel Zarate, former Malo guitarist), Jet (with Jorge Santana), The Righteous Ones), Casanova (with Mike Judge, bassist-creator of Beavis and Butt Head), and The Righteous Ones. But it was 1968, when a top 40 group called The Malibu’s would be his most creative period. The popularity of Santana’s latin rock bands in San Francisco led to a new sound that swept the country. David Rubinson, a producer, decided to start a super latin band and began to include musicians from different areas to form the legendary Chicano super-group Malo. The band was formed in 1971 with Jorge Santana on guitars and Abel Zarate playing bass. Pablo Tellez played the piano and Richard Kemode, a jazz trumpeter Luis Gasca and Richard Bean singing. The group developed a new, horn-oriented latin Funksound in a matter of months. It was exciting and explosive. It was an original concept that merged jazz, latin and R.