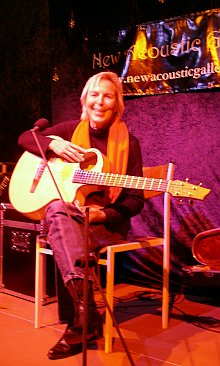 Sara K., also known as Sara Katherine Wooldridge, is an American singer-songwriter. She’s based in Santa Fe. Her music spans blues, folk, and jazz. She has recorded audiophile albums, and used to play a 4-string acoustic guitar. In 2009, she quit the music industry. She was born and raised in Dallas, Texas. Her family was surrounded by music growing up: her mother sang in a choir, her father played in a quartet of barbershops, her brother played in bands, and her sister played guitar. Her family saw music as a hobby and not as a career option. At the age of 15 she began playing guitar with a sister. She took the flamenco guitar and removed all regular strings. Instead, she put four bass strings on (tuned to an Open A). It had a richer sound than an acoustic guitar, but it didn’t sound as deep as a bass. This tuning became her signature. She remained true to her original intent, even though the era of solo acoustic performers was in decline in the late 1970s. After she graduated and moved out, she continued to play whenever and wherever it was possible. She moved to New Mexico after realizing she wasn’t quite fitting in the current scene in Dallas. After moving to Ruidoso, New Mexico’s small mountain town, Sara K., she was made the leader of the Boys Without Sleep band. They toured mostly New Mexico and Los Angeles from 1978 to 1983. For two years, she toured with Gary Nunn, a country singer. After moving to Santa Fe she formed a band with several musicians and released her debut album Gypsy Alley (1989), with Mesa/Bluemoon. Many of the songs are inspired by her almost 15 years of living a nomadic life, which meant she moved around quite a bit. She had reached the end of her nomadic years when she moved to a house on Canyon Road in Santa Fe. There, she won a goldfish at a country fair and adopted Bebe, who is often mentioned in her songs. Sara K. is authentic. She has lived these stories and can relate them from her heart. It’s warm, personal, and moving. The New Mexico Music Industry Coalition awarded her the “Best Album Award” immediately. Bruce Dunlap, guitarist and one of her Gypsy Alley collaborators, was also signed to Chesky Records in New York, which is a record label that focuses mainly on audiophiles. He was instrumental in bringing her to Chesky Records and she remained with Chesky for over ten years. This opened up a new era for Sara K., who was able to see the contrasts between her Santa Fe, southwestern home, and Chesky’s bustling New York. She also saw the difference between the old analogue recording equipment and digital/audiophile ones, as well as between the reality of the record business and the dreams of fame and wealth. Sara K. was able to record six albums with Chesky: Closer than They Appear, Tell Me I’m not Dreamin’ and Play On Words. She also recorded the live album No Cover and What Matters. Chesky created a “Best of Sara K.” album called The Chesky Collection. Sarah makes an appearance on The Ultimate Demonstration Disk, Chesky Records’ sound system benchmarking record. She toured Europe, and she had planned to move to San Francisco. Sara felt that she had been “ripped off in many places by labels and touring firms” at the end of her Chesky contract. Gunter Pauler, owner of Stockfisch Records in Germany, was called to serve as Sara’s sound specialist during her last tour through Germany with Chesky. She was able to tour his studio and received a record contract. He also offered the possibility of Chris Jones, guitarist, signing the contract. Chris Jones was a great partner. Water Falls, her first Stockfisch album, was followed by a 2001 tour, which provided material for both a live DVD (Live in Concert) and a live CD (Live in Concert). This album won her the “Hifi Music Award 2003” by German music magazine AUDIO/stereoplay for audiophile CDs. Hell or High Water, Stockfisch’s third album, was released in 2006. The album features ten brand new songs, with Chris Jones playing guitar and dobro. Jones was diagnosed with Hodgkin’s lymphoma shortly after recording, and just before the album’s release. In 2009, she released Made in the Shade, her fourth Stockfisch album. It included several new versions of songs from her Gypsy Alley albums. She announced her retirement from the music industry with the 2009 release of her album. She wrote to her fans via her label’s website: “After many years on the road, writing music, and spending so much time touring, I have decided to quit recording and touring.” Although it’s difficult to explain, I trust you will get the idea. It was a great run, but it is over. These days, it’s too much for too little. Made in the Shade is the best explanation I can find. Sara K., 2009. Source: Wikipedia