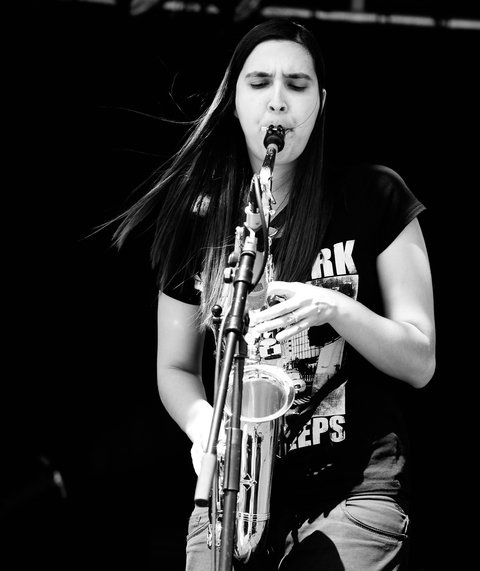 Sarah Chaksad was captivated by music much earlier than others. Sarah Chaksad was taught piano by her mother at home and at school. By 11 years of age, she had discovered the saxophone and began studying piano. That saxophone in particular, along with a budding interest in composition and performing in large ensembles, continued to develop under the tutelage of Matthias Baumann (saxophonist/director of the jazz ensemble) at the Cantonal School in her hometown in Wohlen, CH culminating in a series of compositions premiered by the school choir in fulfillment of her graduation requirements (Abitur). Sarah completed the college-prep coursework at Bern University of Education. Sarah graduated from Jazzschule Bern with a bachelor’s in Jazzschule Bern and completed the K-6 course at Bern University. Her songbook and accompanying recording, “Songs for Kids”, was honored for the 2008 Bachelor thesis. She completed her bachelor’s degree (2011) with Domenic Landolf, and also the master’s program of music pedagogy in the summer of 2013. She was also selected by the Pro Argovia Foundation to be a Pro Argovia artist in their 2013/14 support programme. She was able to study at the conservatory of Basel with a variety of international and Swiss artists, including: Andy Scherrer and Wolfgang Mutspiel, Guillermo Klein and Jorge Rossy. Her musical contributions include a concert with Cleber Alves, a concert with the Brazilian saxophonist, and concerts with Carlo Mombelli, the South African composer and bassist. These projects, along with playing in Matthieu’s big band and attending Guillermo Klein’s arranging lessons, inspired her to start writing pieces for her jazz orchestra. She founded the Sarah Chaksad Orchestra in November 2012. It performed at her Master Diploma concert at Bird’s Eye Jazzclub Basel. The band played two more successful tours in 2015/2016, as well as many concerts in Germany, Austria, and Switzerland. There are many more to come. Sarah was invited to participate in the composer project at the ‘generations International Jazzfestival Frauenfeld. She premiered a new piece for big band there and worked with Maria Schneider, a world-famous New York musician and bandleader. The Kuratorium Aargau awarded her the Forderpreis» that year, which allowed her to concentrate on her music career. Ensembles Sarah Chaksad SONGLINES is Sarah’s main project. It features Malcolm Braff and Lisette Spinnler as well as Pepe Auer, Hildegunn Oleth, and Hildegunn Oiseth. Sarah is the Artistic Leader of IFMCollective, which is perhaps the most important project for jazz and culture in general. They were founded in 2017 and present bi-annual projects made up of a rotating membership. Their goal is to bring together female jazz musicians across Europe in the hopes of creating a network of collaboration. Recordings The Sarah Chaksad Orchestra’s first album, Windmond, was released in 2016. It was recorded at the Bauerstudios in Ludwigsburg by Philip Heck. Werner Stiefele’s review of Windmond in the German music publication RONDO (3.12.2016), seemed to capture the spirit. The album was recorded at the Bauerstudios in Ludwigsburg, DE by Philip Heck and released on Neuklang Records. The Sarah Chaksad Orchestra recorded a new album, titled Tabriz». (the Iranian city where her father was born) and it will be released again by Neuklang Records. Sarah and her crew returned home to the familiar confines of Bauerstudios. Guillermo Klein, Sarah’s former composition teacher and leader of Los Guachos in Argentina, was on hand to conduct the show. He was able to offer thoughtful and insightful observations, while still allowing his student to express her creativity. Guillermo was so honored by the band that he cancelled all other plans to participate. A very special honor was also given to guitarist Wolfgang Muthspiel, who will be featured as a guest musician on title track. The album will be released in October 2019. The band will perform in Luzerne and other cities such as Basel, Zurich and Berlin. Sarah Chaksad SONGLINES (Malcolm Braff and Lisette Spinnler), Marc Mezgolits (Gregor Hilbe, HildegunnOiseth, Pepe auer) and their soon-to-be released album Songlines», recorded at Soundfarm Studio Lucerne (CH), (2019). These compositions are a direct result of Sarah’s words. Songlines, or dreaming tracks, of the Aborigines create an invisible and mythical map that is passed down through oral tradition (singing) generation to generation. These songs are the basis of the walks of Indigineous Australians. The idea is to create simple songs…with a clear melody and very joyful music. Sarah Chaksad also works as a freelance artist and saxophonist. Since summer 2015 she has been running the Jazzcampus Club in Basel (www.jazzcampus.com). In addition, since 2016, she is leading together with Wolfgang Muthspiel the Focusyear program (www.focusyearbasel.com), a globally unique program at the Jazzcampus in Basel. She is still the International Female Musicians Collective’s musical director. From 2017 to 2019, she was also the Schaffhauser Jazzgesprache curator.