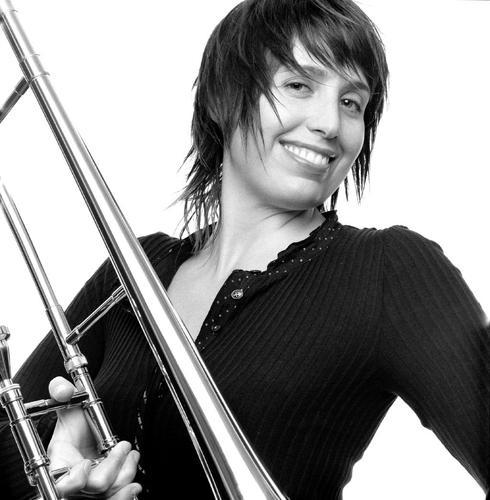 Sarah has performed as a headliner or as a guest performer at many jazz festivals around the globe. In 2006, her performance at Washington DC’s Kennedy Center drew a standing ovation after only 20 minutes of her group’s set. This recording was selected to represent jazz music in America during the NPR World Special “Washington DC” Sarah enjoys being a clinician and guest soloist at junior high and high schools around the globe. She is also a cultural envoy for the US State Department’s Africa Regional Services, where she visits countries like Madagascar, Benin, and Togo. Sarah is supported by the Getzen Company, Inc., which is located in Elkhorn, Wisconsin. She is one of Getzen’s most sought-after Artist in Residence clinicians. She travels the world on her Getzen model 3508Y trombone. Sarah’s newest, most adventurous solo project, the revolutionary ElektricAir, will be released in Spring 2012. It features pianist Robert Glasper, drummer Chris Dave (Maxwell), and DJ Qmillion (Toni Braxton (E-40, Juelz Sanana). Curtis Fuller, a legendary jazz trombonist, said that Sarah Morrow is the “new voice of this Era.” Her Elektric Air cd inspires ME.” Trombonist/composer/lyricist/producer Sarah Morrow broke into the international jazz scene in 1995 as the first female instrumentalist to join Ray Charles’ all-star orchestra. After two years of touring with Charles, she joined a trio of horns in a funk band led by Foley, the former Miles Davis lead bassist. Since then, she has recorded and toured with many great musicians, including Dee Dee Bridgewater and David Murray, the Duke Ellington Orchestra and organist Rhoda Smith, tenor sax legends PeeWee Ellis and Hal “Cornbread”, Singer, American All-Stars In Paris, The Mingus Tribute featuring Ted Curson, Ricky Ford, Anne Ducros and French star Anne Ducros.