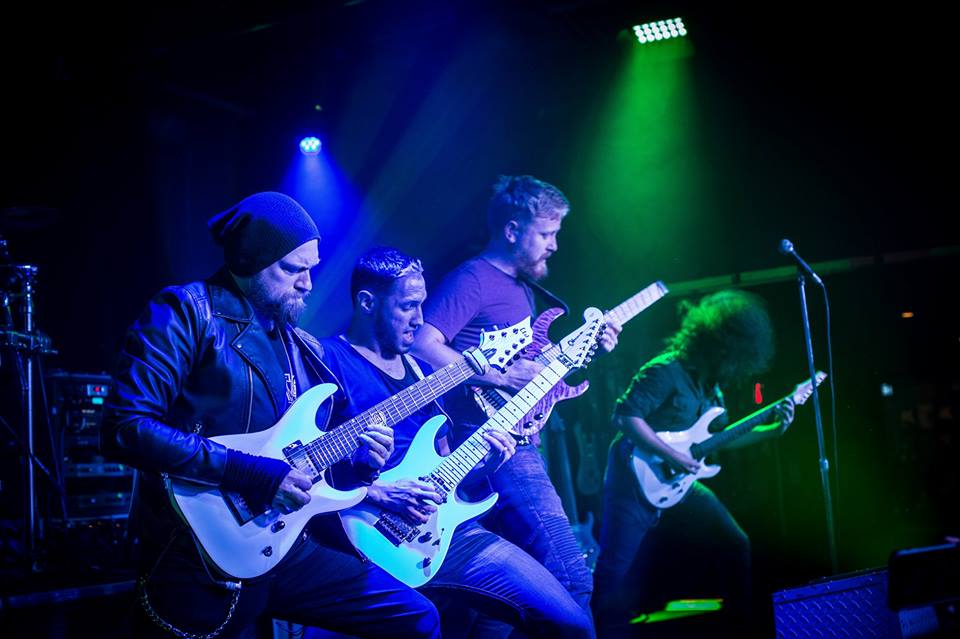 Scale the Summit, an American instrumental progressive rock band, is based in Houston, Texas. It was formed in 2004 and signed with Prosthetic Records. Other progressive acts like Dream Theater and Cynic have influenced the band. The band was discovered as part of the Progressive Nation 2009 Tour with Dream Theater and Zappa Plays Zappa. Travis Levrier and Chris Letchford grew up together in the same area, but they never played music together until 2004. They reconnected in a record shop years before, discussing a common interest, Between the Buried and Me. They formed a Houston metal band that was hard to find a drummer and bass guitarist. Letchford was scheduled to attend the Los Angeles Musicians Institute one year after their formation. Levrier also decided to go. They were looking for new members to their band and thought that they would have the best chance of meeting them there. However, after just a few months, they met Jordan Eberhardt (bass guitar) and Pat Skeffington (drums). Skeffington was first seen by them in a Between the Buried and Me Tshirt, with drumsticks sticking out of his backpack. Eberhardt responded to an advertisement posted on Myspace. Letchford reflected on the experience and said, “I still think that it was just meant for it to be, as moving to Los Angeles wasn’t guaranteed anything.” It was a chance meeting that brought us together. The band was a typical, technical metal band with a Houston vocalist. However, Letchford u0026 Levrier noticed a shift in their sound after they began writing in Los Angeles. The duo wrote their first song “Rode In on Horseback”, and realized that the material sounded like it had been written for a singer. They attended two years of classes at The Institute. Their new band recorded four songs and performed shows all over the city. Letchford and Levrier persuaded Skeffington and Eberhardt to relocate to Houston to make it easier for them to pursue a career as musicians. Letchford explained later that, despite loving the natural beauty of the area, he felt Los Angeles’ music scene was too crowded and difficult for him to sustain. Levrier found work with Into the Moat and threatened the formation of the band. But Letchford sent him a demo recording for the song “Omni”, which would be on Monument’s debut album. Levrier later changed his mind. Despite touring with acts like Between the Buried and Me and The Black Dahlia Murder, Into the Moat was disbanded. Levrier came up with the name Scale the Summit after he was perusing a photo book. He saw a photograph titled “The Summit”, and immediately mentioned the name to the group. Scale the Summit released a demo at their first show. Their first album, Monument was self-funded. Letchford was critical of the album’s sound. He felt it was inferior to the later albums because the group had limited songwriting experience and had very little money. They signed with Prosthetic Records in 2009 and began work on Carving Desert Canyons, their second album. Mike Portnoy from Dream Theater heard the band’s songs and invited them to join him on the 2009 ProgNation Tour. They toured North America with Between the Buried and Me in 2010 and recorded their third album, The Collective. It was released the next year. The band also toured in 2011 with Periphery, Fair to Midland and Cynic, 3 Protest the Hero and Last Chance to Reason. Jordan Eberhardt, who was unable to tour full-time, left the band in April 2012. He was replaced by Mark Michell. Letchford revealed in November 2012 that the band had begun writing material for The Migration. It was released the next year on June 11. Pat Skeffington, the drummer for the band’s upcoming fifth studio album V, was fired in March 2015. J.C. Bryant replaced him. Travis LeVrier, Scale the Summit’s drummer, announced in August 2016 that he was leaving Scale the Summit and joining ENTHEOS as a fully-fledged member. On October 27, 2016, J.C. Bryant, bassist Mark Michell and drummer Charlie Engen were announced as the replacements for Bryant. It was revealed on October 31, 2016 that Letchford had allegedly refused to pay members of the band. Killian Duarte was named as the bass player on December 20, 2016. Scale The Summit’s sixth studio album, In a World of Fear, was released on May 19, 2017. Scale the Summit members meticulously rehearse songs in order to quickly record albums and to perform their songs live exactly like recorded. Letchford believes that the majority of the material is the same during pre-recording rehearsals as it is during recording. However, the band may alter the songs at times. Letchford calls their music “adventure music”, which he says was inspired by the comments of listeners at the Musician’s Institute campus that the music took them on a journey while they listened. The band was often told that they needed a singer before their first album. But Letchford said the group has always opposed the idea of a guest vocalist. The band’s lack of a vocalist allows them to avoid the verse-chorus/verse songwriting approach that many bands using singers must use to accommodate lyrics. Letchford believes that music without vocals can be more difficult than writing it. After the songs have been recorded, the song titles are chosen by listening to the final recording and brainstorming. It can take a long time to select song titles. The lengthy process of selecting song titles can be time-consuming due to their rhythmical complexity (“offtime chugs”) and their use of extended range guitarists. Their music is often called “djent” despite the fact that much of it is “clean channel”, which contradicts the onomatopoeic etymology. Wikipedia