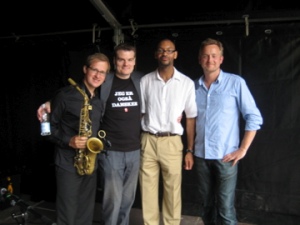 The band’s four members have each contributed compositions that add a personal touch to the repertoire. The band combines Scandinavian lyrics with American rhythms, jazz and elements from contemporary classical music. All performed with an improvisational and lively approach. The musical journey takes us to Afro-inspired spirituals, as well as some New Orleans swing grooves with a modernistic twist. The ballads invoke tranquil and romantic moments in life. Latin jazz’s power combined with odd-meter fusion creates an immersive experience in jazz. Fredrik Kronkvist is a Swedish star alto player. Morten Ramsbol, a Danish New York resident, and Soren Moller, a Danish pianist, have previously collaborated on ‘A Tribute to Trane’, which featured the legendary drummer Antonio Sanchez. A European tour was organized for the 2007 album “A Tribute to Trane”. In NYC, pianist Soren Moller was seated with Jason Marsalis on the bandstand. The idea to create a flexible collaboration with Jason and Soren’s fellow Scandinavian musicians was immediately born. American drummer Jason Marsalis is well-known for his thriving rhythmic drive. He has been instrumental in the development of jazz drumming’s vocabulary since the early 1990’s. He is the youngest member of the famed Marsalis-family, where Wynton Marsalis, the trumpeter, and Branford Marsalis, the saxophonist, are some of the most prominent voices in today’s jazz scene. Fredrik Kronkvist, a powerful and soulful altoman, is regarded as one of Europe’s best alto saxophonists. He takes control whenever he is in front of the camera. Fredrik Kronkvist is an international award-winning saxophonist and has many albums as a leader. He shares his writing and improvisational talents with the listener and gives his insight into how to draw the heat out of a tune. Soren Moller, a pianist from Scandinavia, is currently living in New York City. He is one of a handful of musicians who has made a living in the city. He has composed music for both big bands and classical chamber groups and is currently leading several projects. Soren’s composition San Francisco Blues is a combination of inspirations and techniques from John Adams, a contemporary classical composer. Morten Ramsbol is a top-notch Danish bassist. This speaks volumes about the Danish bass tradition, with Niels-Henning Orstedt Pedersen’s legacy setting the standard. He is a sought-after sideman and has many projects as a leader, including albums with Joey Baron and Jeff Ballard. Jason Marsalis’ Linernotes: “When we lived in Brooklyn in 2006, I played some gigs with Max Wild, an alto saxophonist. The pianist played the music with intense intensity, which was one of my fondest memories. One year later, after I had moved back to New Orleans (LA), I received an email from Soren Moller, a pianist, about playing gigs in Denmark with some local musicians. It turned out that Soren was playing the gig with Max Wild, and he wanted to send me his latest record of the music he was going on. It was a tribute for John Coltrane. I didn’t even start looking at it until about a month before the gig. I was shocked at how much I underestimated the music when I turned the record on to study. When I arrived from the United States, I was prepared to play, so I had to get to rehearsal straight from the airport. This is not an easy task. This was also where I met Morten Ransbol and Fredrik Kronkvist. I felt immediately awakened from jetlag after the first note was played. I was overwhelmed by the intensity of the music and had to take on the role of a musician. Soren set up a two-week tour the next year after that short weekend of shows. Later, it was decided that we would record the tour’s end and each member would contribute original music. This record exceeded all my expectations. Every song has a different personality, which makes this record full of variety that will keep listeners on their toes. This music includes everything from Afro-Cuban to ballad to impressionism and New Orleans second line (from the Swede who is in the band). This record was a lot of fun for me and these musicians. Morten, Fredrik, Soren and Morten all have a broad understanding of different styles. Each musician also has deep knowledge of musical traditions. Finally, there’s one more element of music they have not taken for granted: SWING!” -Jason Marsalis from http://connectiverecords.wordpress.com