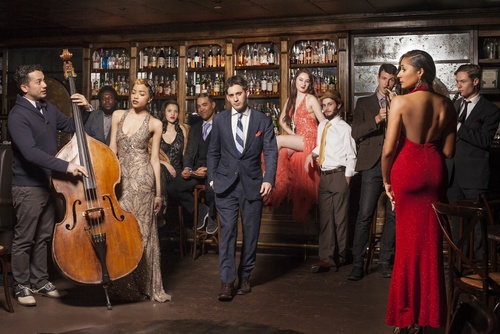 Scott Bradlee leads a time-tripping group that performs popular hits in pop, blues and vintage jazz. How did Miley’s “We Can’t Stop”, a Miley Cyrus hit, become a doo-wop tune in the ’50s? When was Meghan Trainor’s “All About That Bass”, a song about an upright bass fiddle, released? Macklemore’s “Thrift Shop”, a jazzy ’20s tune, evolved into Macklemore’s song. Whose idea was it to remake Lorde’s “Royals”, into a beautiful ballad, sung by a sad clown. This is all part of the postmodern jukebox topsy-turvy musical project. Scott Bradlee, pianist and arranger, takes popular pop and rock songs and creates new arrangements that allow them to be interpreted in a variety of musical styles. Bradlee was born on Long Island and moved to New York City after completing his studies at the University of Hartford in jazz. Bradlee started playing in restaurants and nightclubs around New York City and began to experiment with jazz and ragtime arrangements of pop songs from the 1980s. He recorded several self-released digital album of his offbeat renditions of well-known melodies as well as performances that interpolated seemingly disparate songs from different eras. Bradlee took these ideas to the next level in 2012 when he released A Motown Tribute To Nickelback. But as he was looking for a new platform, he remembered YouTube. YouTube has been hosting solo performances videos since 2009. Bradlee started posting weekly videos where he performed a song with a rotating cast, which were recorded in Bradlee’s living room. Bradlee’s ’50s-style reimagining Cyrus’ “We Can’t Stop” was posted in September 2013. The clip quickly went viral and racked up more than four million views within two months. It also reached 14 million viewers two years later. Bradlee’s PostmodernJukebox channel quickly became a success and Bradlee continued to publish videos and albums that were based on his fun-house renditions of popular songs. Bradlee and his crew had already made more than 130 Postmodern Jukebox videos online by 2015. By 2015, the show was on the road and touring North America, Europe and the United Kingdom. Bradlee was prolific in 2016, releasing several albums, including PMJ and Swing the Vote! Allmusic