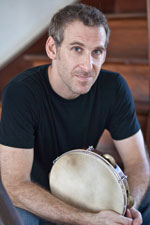 Scott Feiner’s musical journey is unique. He is not only an American pandeiro player but also has introduced the Brazilian hand drum to jazz in a very personal way. Feiner is a native of New York City. He earned a Bachelor of Music in Jazz Studies/Guitar from Hartt School of Music. There he learned all about jazz history from Jackie McLean, the legendary saxophonist. He returned to New York City in 1990 and became a jazz musician, earning a reputation for his ability to swing and his lyrical phrasing. Feiner was a leader of two bands at Augie’s (now Smoke) in the early ’90s. This club is a well-known meeting place for New York City’s top young jazz musicians. He recorded two recordings during this period as a leader, one featuring Larry Goldings, the organist. Feiner discovered the pandeiro on his first visit to Brazil in 1999. It quickly re-inspired him to play music. To be closer to the pandeiro and Brazilian music, he moved to Rio de Janeiro in 2011. He began playing with the best samba and choro musicians in Rio as he developed as a player. Feiner was a well-respected pandeirista just a few short years after his arrival to Rio. Feiner’s “Pandeiro Jazz”, however, is what has really set him apart. The idea was born in an informal performance in New York City. It was first recorded on the CD Pandeiro Jazz by Delira Musica in 2006. It was recorded in New York City by Joe Martin, Freddie Bryant, Joel Frahm (saxophon), and guitarist Freddie Bryant. These musicians are not only bandleaders, but they are also some of the most sought-after sidemen on global jazz. This is the first ever jazz recording to feature a pandeiro instead of a drumset. Brad Mehldau, a world-renowned pianist, described Pandeiro Jazz to be “an unique sonic universe… full of subtlety and surprise”. Feiner’s Pandeiro Jazz success led to the 2008 release of Dois Mundos on the respected Brazilian label Biscoito Fino. It was recorded in Rio de Janeiro by Jesse Sadoc, trumpeter, Marcelo Martins, pianist David Feldman and Alberto Continentino. The album showcased Feiner’s talent as a composer, with over half of the tracks being original compositions. Dois Mundos won a Latin Grammy Award in 2009 and was named “one of Brazil’s best CDs” by Playboy Magazine. The third album, Accents, by Feiner was released on the Zoho Music label in 2010. The album reunited the same group of NYC-based musicians that he released his first CD, Pandeiro Jazz. It also documented the development of the project. JazzTimes magazine’s Accents review stated that Feiner could not have chosen better choices, because the quartet was in perfect sync right from the beginning. Feiner’s fourth album, A View From Below (to be released globally in March 2014), showcases his compositional abilities. He wrote all nine tracks. The album features a new trio format featuring guitarist Guilherme Moneiro and keyboardist Rafael Vernet. Carlos Calado, a respected Brazilian music critic, wrote in Folha de Sao Paulo that the trio’s ability to switch between Brazilian and jazz was remarkable upon its early release in Brazil in October 2013. Scott Feiner