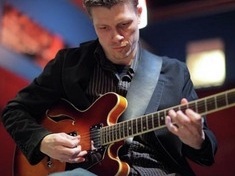 Scott Hesse, a guitarist from Chicago, is well-respected. Scott Hesse is known for his rhythmic and harmonic creativity. He can also be found in straight-ahead settings or in avant-garde settings. Scott has performed at all major jazz venues in the city since 2005 when he moved to Windy City. Scott is a musician, composer, and music educator. Scott has been the director of Eastern Illinois University’s guitar program since 2007. He joined the Harold Washington College faculty in Chicago in 2009. Scott is also a regular clinician at Lane Tech High School, Chicago. He was twice commissioned to compose pieces for the school’s guitar ensemble. Scott is a leader and has recorded three CDs. He also appears on many other CDs. Scott is currently involved in a variety of projects, including Dee Alexander’s Evolution Ensemble and the Marlene Rosenberg Quartet. Scott is currently preparing new music to record with his trio. Scott has a Bachelor’s degree in Cultural Studies from Empire State College, New York, and a Master’s degree in Jazz Composition at DePaul University in Chicago. From www.scotthesse.com