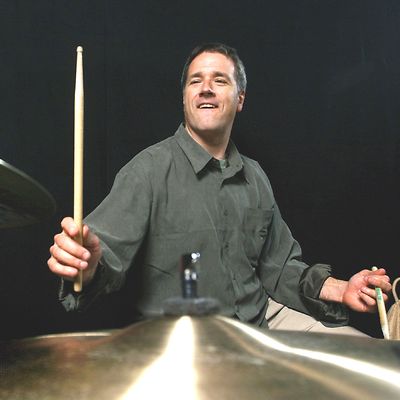 Scott Neumann is a Bartlesville Oklahoman who started playing drums professionally when he was thirteen years old. His first significant work was with the Woody Herman Orchestra which he joined in 1998. Scott is known for being one of New York City’s most versatile and creative drummers since 1988 when he moved to New York City. Scott is the leader of two very different musical groups. His “Neu3 Trio”, which includes the critically acclaimed members Michael Blake and Mark Helias (acoustic basses), looks forward to releasing their newly recorded CD in 2012. Osage County, a more electric quartet, features the legendary members Sam Newsome (sax), Ben Rubin (bass), and David Berkman (“piano”). Scott Neumann and Osage County (Chicken Coup Records), is the first self-titled CD. It is available through itunes or amazon.com. Scott has toured with Madeleine Peyroux and Ben Allison, Tony Trischka and Jazz Mandolin Project. He also worked with Woody Herman and Woody Ozone. Scott has collaborated with jazz legends like Rufus Reid, Grady Tate and Kenny Barron while in New York City. Recent sideman projects include a three-plus year tenure with Bill Mobley’s Big Band at NYC’s jazz club Smoke. Glafkos Kontemetios’s Trio performed and recorded with Bill Warfield’s New York Jazz Octet and Dan Wilensky. The Grammy-nominated Orchestra of Pete McGuiness, Diane Moser’s Composers Big Band and the Grammy-nominated Orchestra of Pete McGuiness are two other large Ensemble associations. Scott has recorded over 50 CDs with artists such as Kenny Werner and Claudio Roditi. Scott has been a vocalist’s accompanimental musician, supporting the talents of Lesley Gore and Marilyn Maye, Billy Stritch, Vicki Carr, and others. Scott’s Broadway musicals work has been a testament to his musical talent since 1999. Scott was the Broadway Production of Swing’s featured drummer. Scott has also appeared in Chicago, End of the Rainbow and How To Succeed Without Trying. Scott has been an adjunct professor at Lehigh University since 2005 and has directed drum studies. Scott is a Sabian Cymbalist and Jazz educator and has given workshops to hundreds of students at universities, colleges and high schools across the United States, Europe, and South America. Scott has many years of experience in instrumental music education at both the elementary and high schools levels. Scott is an exclusive artist for G.M.S. and also teaches. Sabian Cymbals, Aquarian Drumheads, and Drums from http://scottneumannmusic.com