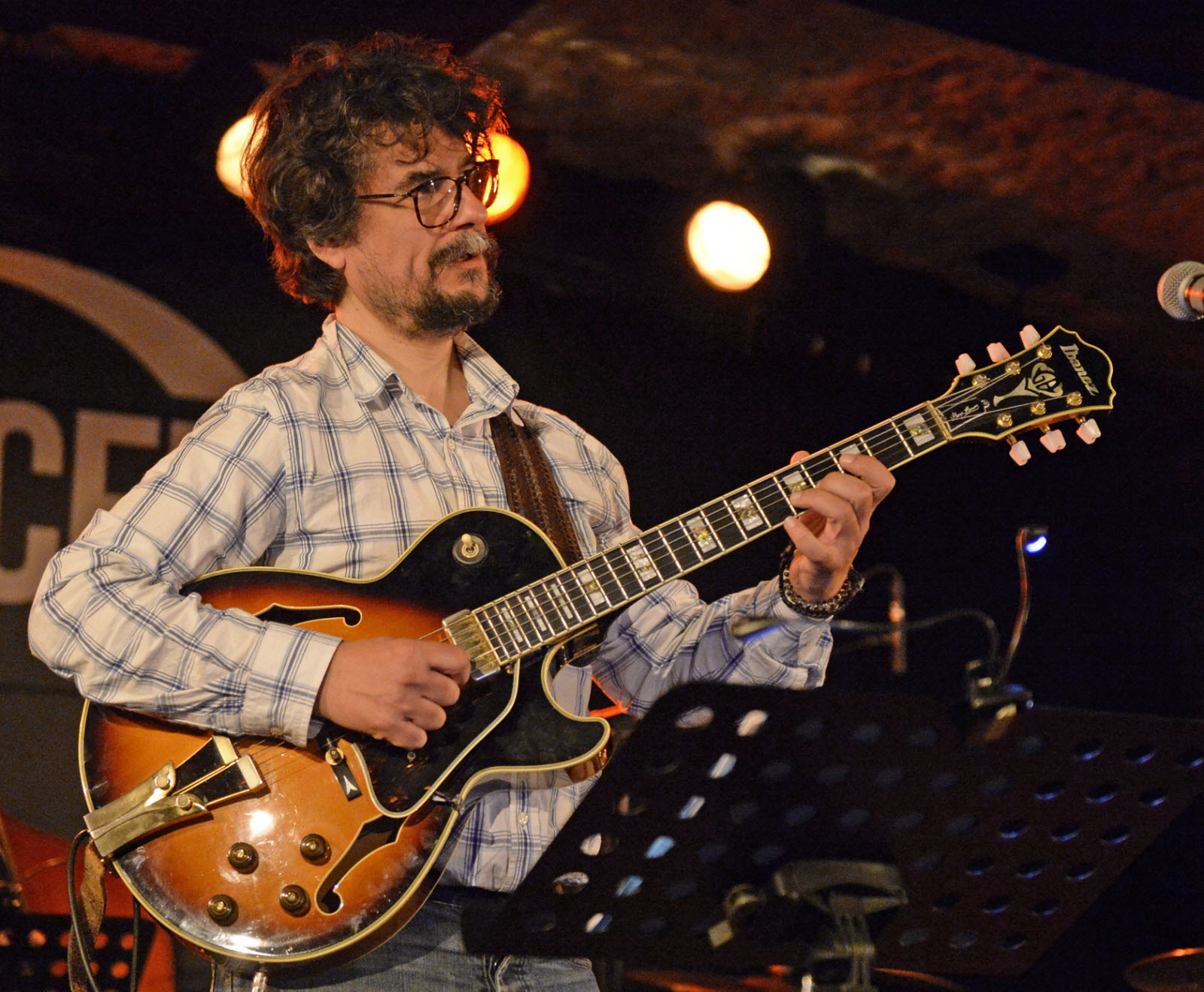 Sebastien Joulie began playing guitar when he was 12 years old, first becoming fascinated by blues and rock music. He fell in love with jazz because of his curiosity and experiences in Vichy, the city he grew-up in. He studied English and then moved to Lyon to study music. He then entered the Chambery Conservatory, where he studied with Pierre Drevet, a trumpeter and Guillaume de Chassy, a pianist. In June 2001, he obtained his DEM Jazz and recorded his first album “REG”, with Talkin’ ‘About, of which he is a founding member. Francois Chassagnite began performing with well-known musicians like Pierre Drevet and Eric Prost. He was a member of the Talkin ‘About group at Paris la Defense’s jazz Springboard in 2002. From September 2002 to June 2003, he moved to New York City and enrolled in the Jazz Master’s degree program at New School University. He studied with Reggie Workman, Peter Bernstein, and Charles Tolliver. He also had the opportunity to rub shoulders with Robert Glasper and Marcus Strickland. The New York experience will have a significant impact on both the artistic and transmission of jazz music. He returned to France and performed at various festivals and clubs in France as part of the Talkin ‘About group. Along with David Bressat, he joined the Polycarpe Collective. They were involved in the diffusion of jazz in Lyon, and especially in the creation “Periscope”, which is a key player in current music in the area. Talkin’ ‘About “Connections”, the second album that was released in 2005. Guitarist, composer, arranger, in various groups, including Jazz dans le Ravin, a re-reading the early hours Gainsbourg’s Le Boogaloo Quintet. With Florent Nisse playing double bass and Charles Clayette as drummers, his own trio was formed. Recording of “The Lighthouse”, the album (2010). He is co-leader of the Third Roam trio along with Julien Bertrand. He invited Walter Smith III, an American saxophonist, to join him in 2013 for his new project, the “Sebastien Joulie Group”. They record the album “Green Waves” in quartet at the end of a French tour. This allows their leader to sign with Fresh Sound New Talent, a prestigious label. He has been a member of the Francois-Regis Gallix not “Les Permutants” since 2015. He fulfilled his childhood dream of mixing literature with jazz in 2017 when he created “Willy Play Don’t Try”, a show that combines music and poetry based on the works of Charles Bukowski. His second album, “Resilience”, was recorded and released by Fresh Sound New Talent. Pierre de Bethmann plays piano, Francois Regis Gallix plays double bass, and Charles Clayette plays drums. The Resilience project has been performing on numerous stages and festivals throughout France and Switzerland since 2017. He formed the Links Quartet that year with Jean Manuel Miquel, a Parisian trumpeter. The quartet combines original compositions with modern interpretations of Chet Baker’s music. He co-founded Styx in 2019 with talented trumpeter Achille Alavarado, Thomas Belin, Benoit Tvenot, and Zacchary le Blond, who plays double bass. His repertoire included compositions by the trumpeter. He will be recording the Thomas Belin Quartet album, “Sounds N’ Hound”, in 2020. It will be released in March 2021. Sebastien Joulie group’s third Fresh Sound New Talent CD, “Split Feelings”, also features the same line-up as “Resilience” with the exception of Etienne Deconfin, pianist-keyboardist. from www.freshsoundrecords.com