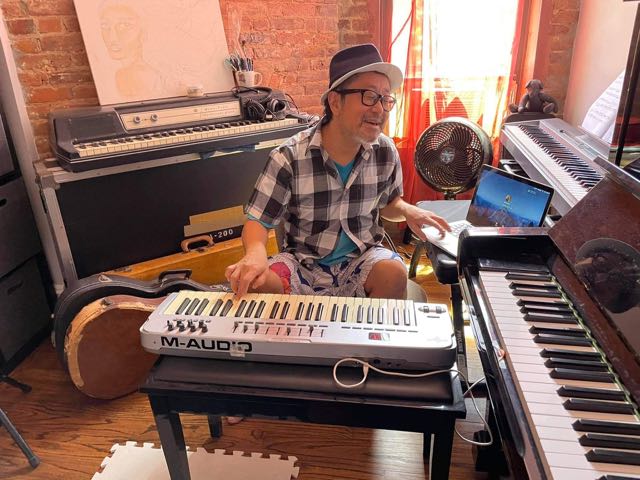 Senri Oe was born in 1960 and has been an active member of the Japanese music scene ever since 1983, when he made his debut. His talents in television and film industry were extended and he was a successful actor and host. He decided to stop his 25-year-long career as a popular musician in 2008 and pursue jazz. He studied with Aaron Goldberg, Junior Mance, and Toru Todo. He is well-known as the regular pianist of Morning Musuko (a big band of 17 musicians specializing Japanese pop music). They are committed to cross-cultural communication and understanding between Japan, the rest of the globe and their own interpretations of J-pop. In spring 2011, the band completed their first East Coast tour. They performed at PhilaMOCA in Washington DC Cherry Blossom Festival in Brooklyn Botanic Garden Cherry Blossom Festival and Japan Day in Central Park. He also leads his own band and performs in jazz venues both in Japan and New York. He has performed at Blue Note Tokyo, Nagoya and Osaka; Motion Blue Yokohama and Sweet Basil Tokyo; NB Lounge, Bitter End and Bowery Ballroom; Gershwin Hotel; Tenri Cultural Institute and Dixon Place. He is currently featured monthly on Tomijazz New York. His Japanese monthly column, Senri Oe’s New York Music Life, which he started in May 2010, is very well received by Japanese readers, not only in New York, but also overseas. Senri founded his own record label, “PND Records and Music Publishing” in February 2012. bio by peaceneverdies.com