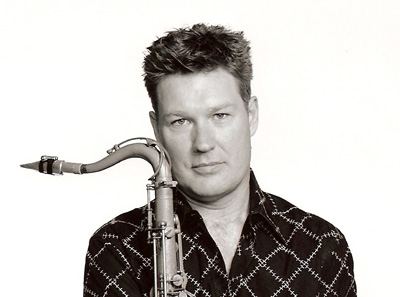 Paul “Shilts”, Weimar is a Londoner who has been playing the saxophone since he was ten years old. His career spans all genres of jazz, soul, and pop music. He has toured the globe and recorded with many international artists. Paul is the Bandleader and frontman of “Down To The Bone”, a British export of urban jazz funk that has been hugely successful in the United States. Paul features heavily on 7 albums released by DTTB, both as a musician and as a writer. Paul was just 15 years old when he was invited to join the National Youth Jazz Orchestra of Great Britain. Paul first discovered the business through NYJO, where he was able to support great jazz artists like Nancy Wilson, Buddy Greco and Rosemary Clooney. Paul started working in nightclubs after becoming a professional at 16 and supported many American stars like Rose Royce, Four Tops, Drifters, Drifters, and The Temptations. Paul was eager to travel the world and embarked upon a trip that took him to Hong Kong, Europe, Asia, and the Caribbean. Paul made a name for himself in London’s session scene by recording with such artists as Bill Wyman and Jimmy Paige, Lulu Conner Reeves, Dina Carroll, Conner Reeves, Conner Reeves, Conner Reeves, Conner Reeves, Lulu, Conner Reeves, and Lulu. Paul joined “Breathe”, a UK pop band, after which he had two top 10 US hits with “Hands to Heaven” and “How Can I Fall”. Despite a few years touring and pop success, Paul didn’t lose sight of jazz. He co-founded “System X” along five like-minded London session musicians, and recorded the highly acclaimed album, “Beat The System”. While playing regularly on London’s jazz club circuit, Paul’s soulful and funky saxophone playing earned him a place in the British Acid Jazz group “The Brand New Heavies”. He toured the globe several times during this six-year partnership. Paul was also able to travel the United States with Jamiroquai, a UK chart-topper in 1995. Paul met Neil Cowley in 1995 while on tour with the Heavies. This led to a meeting Chris J Morgans at Internal Bass as well as Stuart Wade, who are the creative force behind DTTB. After appearing on “Urban Groove”, Chris and Stuart asked Paul for a lead role in the DTTB live band that would tour the US. Paul is now the face of the DTTB live bands and a target for solo artists. He has toured extensively and released seven albums. Higher Octave Records in the US approached Paul to create his debut album “Shilts”. “See What Happens” features a group of London’s best musicians. Many of these talents are also featured in the DTTB live bands. His debut album was a hit in America and won an industry nomination at the National Smooth Jazz Awards in the category of “Best New Actor”. Paul, his wife and their two children moved to Los Angeles in 2004 from the UK. He has been a regular guest on many top Smooth Jazz artists like Rick Braun, Jeff Lorber, Paul Brown, and Peter White. Paul was working with Jeff Lorber’s band when Rick Braun called him to ask if he would be willing to share some of his music to ARTizen Music. Paul agreed and signed Shilts with Rick Braun, Steve Chapman, Richard Elliot and Al Evers. This culminated in the 2006 release of HeadBoppin. This CD received rave reviews and featured some of Paul’s musical heroes. After a difficult decision, Paul decided to leave DTTB in 2008 and focus his attention on his solo career. Things look better for the future with Paul’s new album, “Jigsaw Life”, and his new label nuGroove records (DTTB’s first US home in 1997) Paul’s philosophy is to make good music, but not lose sight of the fact that it should also be fun. Let’s wait and ………….. let’s “see what happens!” From www.shiltsmusic.com