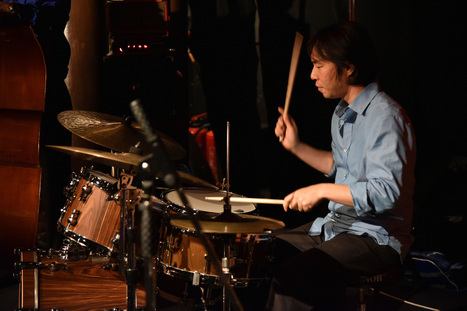 His melodic and rhythmic approach to drumset playing is well-known. His unique and sensitive cymbal work creates a distinctive sound. Shinya Fukumori, a Munich-based drummer was born in Osaka (Japan) on January 5, 1984. He moved to the U.S. at 17 and attended Brookhaven College as well as the University of Texas at Arlington. He completed his studies at Berklee College of Music, Boston, MA. He was awarded several awards. He moved to Europe shortly after graduating with Magna Cum Laude. Fukumori has performed in many musical settings with many different projects. He has toured and performed worldwide, including Germany, France, Estonia, Romania, Belgium, Switzerland, Mexico, and U.S.A., and his own trio (with Walter Lang on piano and Matthieu Bordenave on saxophone/clarinet) has recorded in April, 2015 and was debuted with a tour in Japan in October, 2015. from www.shinyafukumori.com