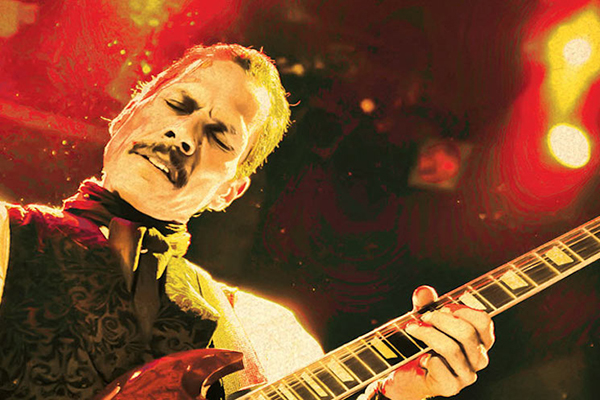 Shuggie Otis (born Johnny Alexander Veliotes, Jr.; November 30, 1953) is an American singer-songwriter, recording artist, and multi-instrumentalist. Otis’ song “Strawberry Letter 23”, as recorded by The Brothers Johnson, topped the Billboard R&B charts and reached #5 on the Billboard Hot 100 in 1977. His 1974 single “Inspiration information”, which was taken from the album of same name, reached #56 on the R&B charts.
Otis was born in Los Angeles, California to Johnny Otis, a rhythm and blues musician, bandleader and impresario, and Phyllis Otis. Phyllis, his mother, coined the name “Shuggie” (shortening for “sugar”) when he was a baby. Otis started playing guitar at two years old and began performing professionally with his father’s band at twelve years old. He often wore dark glasses and a fake moustache to play in nightclubs after-hours. Otis is primarily known for his guitar playing, but he can also sing and play a variety of other instruments.

Otis grew up with and was heavily influenced by many legendary blues, jazz and R&B musicians within his father Johnny’s circle. Otis also began to gravitate towards popular music from his generation like Sly Stone and Jimi Hendrix. Al Kooper invited Otis to appear as the featured guest on the second installment in the “Super Session”, an album series that had previously featured Mike Bloomfield and Stephen Stills. Kooper and the then-fifteen-year-old Otis recorded the whole album over one weekend in New York. Otis and his father, Delmar ‘Mighty Mouth,’ Evans, immediately returned to Los Angeles. The album, “Cold Shot”, was released on the Kent label in 1969. Otis also recorded the unusually obscure and risky “Snatch&The Poontangs”, which was rated X for its explicit lyrics. Otis recorded tracks under “Prince Wunnerful”.

Otis released “Here Comes Shuggie Otis”, his first solo album, later in the year on Epic Records. On this debut album, Otis was joined by many musicians, including Johnny Haywood, Al McKibbon and Wilton Felder. His fame was further consolidated and he was soon spotted by B. B. King, who admitted that Otis was his favorite new guitarist in a 1970 Guitar Player magazine issue. Otis recorded and performed with many artists during this time, including Frank Zappa, Etta Jam, Richard Berry and Louis Jordan (who played electric bass on the 1969 album “Hot Rats”) and Bobby ‘Blue Bland.

Otis’s 1971 Epic Records album “Freedom Flight”, featuring his hit song “Strawberry Letter 23”, was the one that garnered him the most attention. Both the single and album reached the Billboard Top 200. Otis was then noticed by Brothers Johnson guitarist George Johnson who played the song for Quincy Jones. The song was instantly covered by them and became a huge hit. Otis performed most of the parts himself in the studio. However, there was a large lineup for this album, which included George Duke, Journey and Whitesnake keyboardists.

Otis’s third and final album, “Inspiration Information”, was released in 1974 by Epic Records. It took almost three years for the album to be completed. Otis wrote and arranged all the songs, except for the horns. “Inspiration Information”, despite its much-anticipated impact, only one single, the title track, reached the Billboard Top 200. Otis was approached in April by Billy Preston, representing The Rolling Stones. He asked him to join them on their next world tour. Otis declined the offer and was offered the opportunity to work with Quincy Jones on the production of Otis’s next record. Otis was criticized for taking his time and lost his Epic Records recording contract. Otis only credits from the mid-1970s came as a session musician on his father’s recordings.

With the rise of acid jazz and rare groove, “Inspiration Information”, gained a large following. Prince and Lenny Kravitz praised it. The album was reissued by David Byrne’s independent label Luaka Bop Records on April 3, 2001. This CD reissue features all 9 tracks from the original album plus four songs taken directly from Otis 1971 album “Freedom Flight”. It also includes new cover art, liner notes and never-seen before photos. Otis appears in all of Johnny’s books as well as in “Alligator Records Presents West Coast Blues”, which was published in August 1998.

Otis claimed that his long-awaited fourth album, as yet untitled, will be released on his own label sometime in 2012. The album will feature all Otis’ original compositions from 1975 through the present. It may also include live material from rare performances. Unfortunately, this is a rumor. Similar news was reported back in 2011. Shuggie has not been working on any albums at the moment and will not be in the near future. People claim that Shuggie is worried that he won’t be able top his achievements in previous albums.