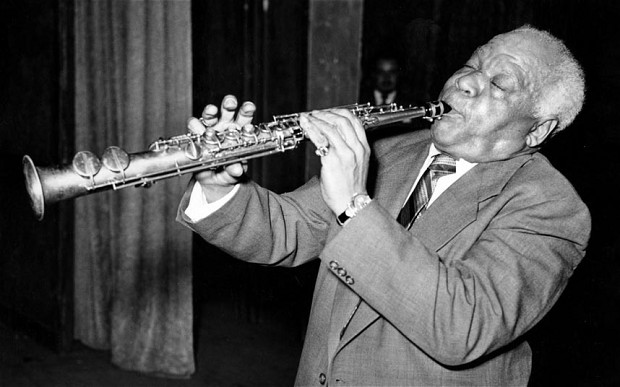 Sidney Bechet (1897-1959), was an American jazz clarinettist, soprano saxophonist, and U.S. jazz clarinettist. Bechet was born on 14 May 1897 in New Orleans. He was able to quickly master every musical instrument from a young age. Many New Orleanians remember him as a cornet hot-shot during his youth. He chose the clarinet initially, but he later decided to make it his main instrument. Bechet was one of jazz’s most respected clarinetists for many decades. Perhaps his most famous achievement is as a master of the soprano clarinet. Bechet was the pioneer of jazz saxophonists. His playing featured a forceful delivery, well-conceived, improvised ideas and a distinct vibrato. Bechet was familiar with playing in traveling shows before he left New Orleans at twenty-eight. He was never content to settle in one location. He moved between New York City, Chicago and Europe until he finally settled in France in 1950. In 1951, he married Elisabeth Ziegler. Bechet was a successful composer in jazz, pop and extended concert work. Many of his recordings have been reissued. Some highlights include the 1924 sides featuring Louis Armstrong in “Clarence Williams Blue Five”, the 1932 and 1940 New Orleans Feetwarmers sides and a 1938 Tommy Ladnier Orchestra session (“Weary Blues”, and “Really the Blues”) as well as various versions of his composition “Petite Fleur”. As an experiment in overdubbing at RCA Studios in 1941, he recorded six instruments: clarinet, clarinet and tenor saxophones, the piano, bass, drums, and the clarinet. You can hear this recording under the title “Sheik of Araby”. Bechet wrote his autobiography Treat It Gentle shortly before his death in Paris. On 14 May 1959, Bechet died. This was his sixty-second anniversary. Text contributed by users is available under Creative Commons By–SA License. It may also be available under GNU FDL.