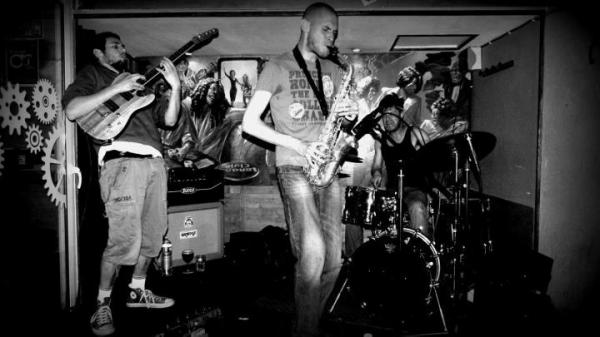 Paris, France – Sidony Box, a French avant-garde music group, has released their third album, “Sidony Box Rules”. This release was much anticipated by music lovers around the globe. Sidony Box was awarded the “Rezzo Jazz an Vienne 2010” showcase. They were also selected for AFIJMA’s “Jazz Migration 2011” tour. Sidony Box already has two albums that have been praised by the international press. Venux Deluxe, a legend for his work as a collaborator with legends like Magma or Gong, is back to bring Sidony Box on stage with a glowing and heavenly third album. The power jazz trio is reborn in the spirit of their illustrious predecessors while still retaining the same devastating energy that gave birth to the group. The music is free electrons moving in the same direction. Sidony Box has been exploring musical boundaries with astonishing consistency, creating an imaginary artistic landscape. It is now writing a new chapter in its history and it will be impossible to miss! It is best to highlight the mind and aspirations of the trio when presenting their music. Sidony Box was born out of necessity and obviousness. It was not a planned project, but a spontaneous result of an unplanned encounter. The three musicians are playing for the first time together. However, the genuine sound and the desire to follow a common musical path emerge naturally. Each member of the band has their own musical identity and creates a unique musical repertoire that blends with the current world. This is far from the traditional, well-structured styles. The name spontaneity is now a synonym for extemporaneous emotions and a clever mixture of influences. Although Manuel Adnot is a guitarist with many diverse references, such as Deftones and Happy Apple, Sigur Ros, Radiohead, drummer Arthur Narcy, a fervent trance and working sound fan, while Elie Dalibert, an alto sax player, is more grounded in jazz tradition but is naturally open to other sound cultures. Pop accents, noise, and metal are all de facto present. However, improvised speech is always the foundation of their pieces. Their motto is to be completely present. The trio’s credo is to play whatever music comes to them, not to fix their style. Most often, the pieces are woven together from a written template to create a band composition in the three distinct elements of the band. Manu Adnot, guitarist, says that “Sidony Box Rules” is the culmination of all the work we have done since the band was founded in 2009. All music genres are played at their respective paroxysms: free jazz music, pop music. hardcore, electronics, post-rock… We wanted to be able to play in a variety of styles, with just a trio and no bass. We tried a different way of thinking, with more free improvisations. This time the things came out naturally. It was a great time to have fun and get out all the energy. The result of all that was free thinking, free music playing, and lots of emotion is this album. Hope it will touch you too.” from http://sidonyboxband.blogspot.com