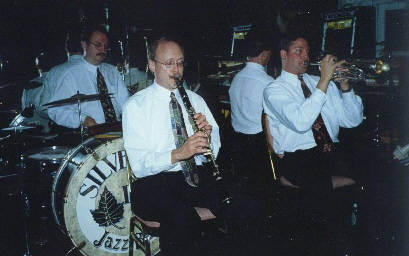 The Silver Leaf Jazz Band was founded in New Orleans on October 25, 1992. The SLJB, a tribute to its name from the heydays of jazz, performed every night at the Can-Can Jazz Cafe in Royal Sonesta Hotel for over ten years. Chris Tyle, the leader of today’s SLJB, makes his home in Portland. He continues the tradition of the SLJB throughout the Pacific Northwest and draws on the best musicians for his group. With over 30 years of experience in the music business, Tyle is a multi-instrumentalist, playing trumpet/cornet, clarinet and drums. He can often be found performing with the best traditional jazz bands in the country or guesting with European groups. Tyle has recorded more than 50 CDs with a variety of ensembles, including the SLJB. The Penguin Guide to Jazz on CD awarded the SLJB’s CD, “New Orleans Wiggle”, its highest rating of four stars and a special crown in 1993. A track from Tyle’s CD “The Smiler” was featured on the first episode of Ken Burns’ PBS series Jazz in 2001. from http://mediaweavers.net