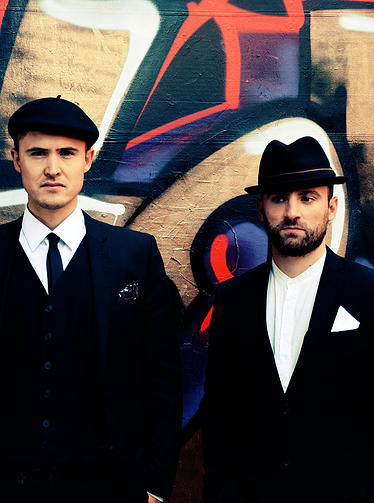 The Simians are not just a jazz band; they are comic book storytellers in the great comic-book tradition. This album contains songs that are a soundtrack for a hero and a villain. Some characters are good while others are bad, but they are all legends filled with stories of love, revenge, tragedy, and romance. The Simians tell their stories through jazz in a post-apocalyptic setting. The Simians are led by Lorenzo Bassignani and Andy ‘Monkey ‘Davis’ Davies, two urban warriors. Located in London, “Monkey” is a trumpet player and a student of the American art form Bebop. He is also an expert in martial arts, having learned them while working for the Russian mafia during the Cold War. He is known to have once played ‘Confirmation’ by Charlie Parker, and was able to kayoe a man. The chump hasn’t gotten up. “Lama” is a bass player at night. He is a chess player by day, and can be found practicing his trade as well as playing chess alone. The album’s associates are three hand-picked elite mercenaries: Sam Leak, Ivo Neame, and Benet ‘The Buffalo” Mclean on piano duty. Ant Law and Luca Boscagin are on guitar. The lovely Polly Gibbons sings and Saleem Raman plays drums. Wicked. This album contains eleven dark tales of the macabre. We hope you enjoy it if you make it all the way to the end. from www.simiansofswing.co.uk