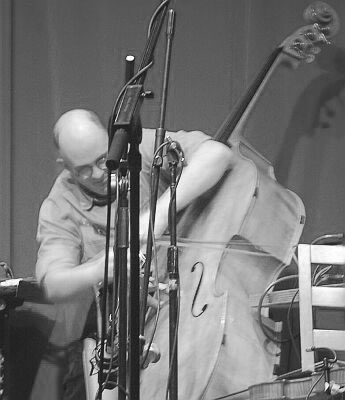 Simon H. Fell, 13 January 1959 – 26 June 2020 was a composer and bassist. He is best known as an improviser free and a composer of complex post-serialist pieces. Fell started playing double bass in 1973. From 1978 to 1981 he read English Literature at Fitzwilliam College of Cambridge University, an interest that led to ties to many of the poets associated with the Cambridge scene (a later work, Music for 10(0), involves settings of texts by the poet/music journalist/provocateur Ben Watson). Fell’s first group, which included drummer Paul Hession (and saxophonist Alan Wilkinson), was an early free-jazz group that was fast and furious by standards for that genre. They released their work primarily as cassettes and CDs under Fell’s Bruce’s Fingers label, which included Bogey’s and their only studio album, “foom!” foom! The most extreme and sonically extreme of their statements was however The Horrors of Darmstadt (Shock), which they grainily recorded. Its title is a joke from a BBC announcer about the avant-garde Darmstadt School for composers. Fell was also a member of the free jazz trio Badland, which was led by saxophonist Simon Rose. Steve Noble took over as the drummer. The improvising string percussion ensemble ZFP, which was composed with Marcio Mattos, Carlos Zingaro and Mark Sanders, and SFQ (a quartet/quintet that has changed members, although clarinettist Alex Ward remains a constant. Fell’s 2001 version, Thirteen Rectangles, of his SFQ composition was broadcast twice by BBC. It was nominated for the new work’ award at the 2002 BBC Jazz Awards. In sharp contrast to the uproar of Hession/Wilkinson/Fell, the trio IST (with Rhodri Davies and Mark Wastell) was one of the seminal groups in the development of the ultra-quiet aesthetic now generally called “EAI” or “electroacoustic improvisation”. Fell was also a member of many other ensembles such as the London Improvisers Orchestra or Derek Bailey’s Company Week. Compilation is Fell’s main sequence of compositions. In total, this heading was used for four projects. These are not compilations of material from the past, but large-scale new works. The use of serialist techniques such as tone rows and retrograde structures is evident in the musical language.