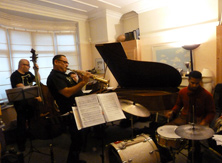 It was 2009, when I first saw Gilad’s Orient House Ensemble perform their Charlie Parker with Strings project. This was the first time that I had ever seen such a quartet work together. This was a meeting of two disciplines: the formal and the improvisational. Instead of transporting me back to New York in 50’s, I was reminded instead of Neil Ardley’s original, shimmering arrangements for jazz and small strings, of sixties music… John Barry, Morricone and Nicolai; Roy Budd and Dankworth; Quincy Jones; Legrand and Colombier; Dusty and Scott and Gainsbourg. 18 months later, I found myself alone in a friend’s farmhouse on a hillside of Haute Provence during the Indian summer 2011. In Loving Memory of America by Gilad was getting repeated play. Two songs sung by Mireille Darc were found on Youtube. Since my first trips to Paris as a serviceman of L’Archet d’Or and Coup d’Archet, I had been quietly collecting Gainsbourg records. But, I hadn’t heard these incredible songs, Helicoptere or Le Drapeau Noir. It was like a tornado. The record I was looking for wasn’t in my collection. Gilad was interested in the project and I reached out to him the next day. He agreed. Matt Bourne, whom I had met in Leeds earlier this year, was my contact. Over the next months, emails and occasional telephone calls were continued. Ros was introduced to me by Gilad. The decisions were made and the lines were drawn. Ros started assembling her dream team. Leo Lara, a Tarifa-based musician, invited me to record in London in the summer 2012. Rehearsals started at Saint Mark’s Church St John’s Wood, October. Recordings took place at Abbey Road Studio 2 in the following month and November. Mixing was completed in March 2013 at Eastcote Studios. Peter Doig created the amazing artwork for this album, and Sine Qua Non Plus in December. I had a brief to create this album. It should be intimate and unashamedly romance while avoiding cheesiness. It’s about love and all its manifestations. The group of musicians shares the name Sine Qua non, which is Serge’s Tu etais une condition sine qua Non de ma raison in Ballade de Melody Nelson. All respect to SG. Glenn Armstrong Nottingham March 2014 at www.coupperdu.com