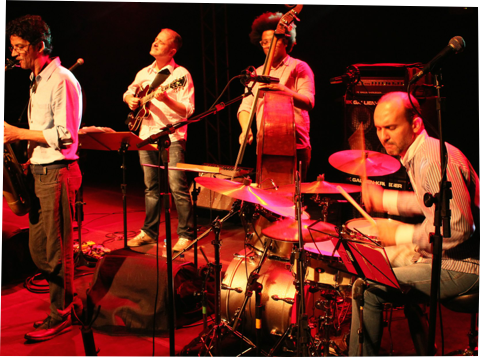 Sinequanon, a Brazilian contemporary jazz band, explores collective improvisation in an acoustic jazz setting. The group’s influences include contemporary classical music and NY jazz, as well as Brazilian jazz. The band’s history began in the USA in the late 1990s when Lupa and Carlos formed a partnership. After performing with various groups, they recorded “IMAGES”, which was nominated for Best Latin Jazz Album at Latin Grammy 2000. They formed a quartet in Brazil in 2001, with Vitor Alcantara as saxophonist and Guto Brambilla as acoustic bassist, the band Sinequanon. The cds “SINEQUANON”, TELESCOPIO, and “HORIZONTE APRIL” were recorded by this group. The group has performed all over Brazil since then, including in Rio de Janeiro and Brasilia. Sidiel Vieira, a bass player, joins the group in 2011. In 2013, they record the live CD “Ao Vivo No Jazz Nos Fundos”, which is released in 2015. from www.sinequanonjazz.com