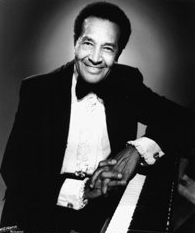 Sir Charles Thompson, a name that is elegantly referred to as swing, was one of few musicians who could make the graceful transition from swing to bop during the revolution. His piano playing style is light-fingered, with a Basie-descended bop sound. He was also able to adapt it to the organ. Thompson started his career with territory bands in the Midwest in the 1930s. His first instrument was the violin. In 1940, he briefly joined Lionel Hampton. However, he left to work with small groups, contribute arrangements to Basie and Hampton, Fletcher Henderson and Jimmy Dorsey and other bands. He began to learn about the basics of bop while working at New York’s 52nd Street clubs during World War II. Thompson was a member of the Coleman Hawkins/Howard McGhee group, and he traveled to Hollywood with them in 1944-1945 to record several great swing/bop sides (now on Hollywood Stampede), as well as his energetic tune “Ladies’ Lullaby” which Asch recorded. Thompson had absorbed so much of the language and ethos that bop was his first love, “Robbins Nest”, which became a hit with Sir Charles Jacquet. It also inspired a haunting, heartbreaking Gil Evans arrangement for Claude Thornhill. Takin’ OffThompson recorded several small-group albums for Vanguard in 1950s and two more for Columbia in 1959, 1960 and 1960. He also appeared as a sideman to Buck Clayton and Jimmy Rushing and spent most of the 1950s as an organist. In the 1960s, he toured the U.S., Canada and Puerto Rico leading small groups. He also toured Europe with Clayton. After a brief bout with illness, he was back in action in 1975. On the Delmark reissue Takin’ Off, you can find his early bop sides with Apollo, including those with Hawkins, Charlie Parker and Charlie Parker. Allmusic