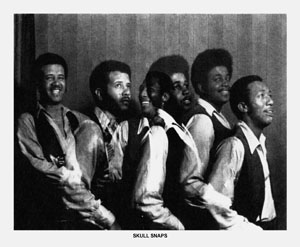 Skull Snaps was a mysterious funk band that managed to record and release an album entitled 1973 before disbanding. Skull Snaps, a small-time GSF release, has been heard countless times on rap records. Gang Starr’s “Take It Personal,” Camp Lo’s “Cooley High,” Ol’ Dirty Basstard’s ‘Hippa to the Hoppa,” Lords of the Underground’s ‘Funky Child,” and Diamond D’s „Sally Got a One Track Mind” are just a few of the many tracks that have used the drums from “It’s a New Day”. To the delight of many who had paid triple the price for the original LP, Charly issued the CD later on. Andy Kellman, All Music Guide