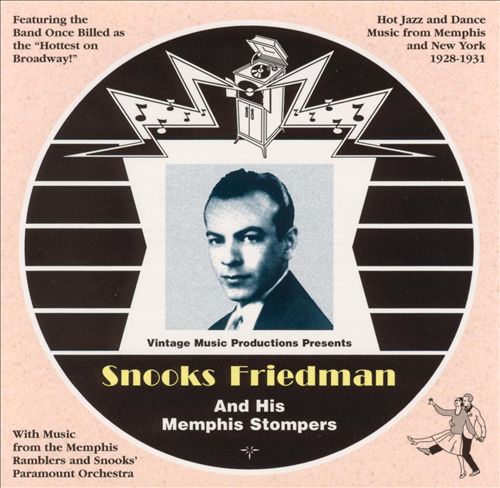 Snooks Friedman, a supportive drummer, led Snooks and his Memphis Stompers. This energetic group recorded 42 titles between 1931-32. Friedman began playing professionally as a professional musician in 1923 when he joined the Ole Miss Jesters. He gained experience with Meyer Davis and Hip Bennett in Arkansas and Wisconsin, and recorded with the latter. He returned to Memphis in 1926 and founded the Memphis Stompers. Friedman recorded six songs under this name in 1928 in Memphis, and two in Camden (New Jersey) in 1929. The original sextet was a band of ten members when it moved to New York in late-1928. It was a flexible group that could play both jazz and dance music. They performed at most of the major theatres, including a six-month stint at Roseland. The band began their three-year run at the Paramount Hotel in 1931, with the addition of a string group. They were also featured in obscure Warner Brothers movies and played background music for some Dave and Max Fleischer cartoons. Snooks Friedman’s band was active in New York up to the start of World War II, even though they did not record any more recordings. Friedman returned to New York and served several years in Navy. Friedman formed a dixieland group in Memphis after the war, which he continued to run until it was destroyed by a 1958 fire. Snooks Friedman was active in the town until his retirement in 1972. He played with his own band and as a sideman. A CD was released by Parklane in the mid-1990s. It contains 22 songs by Snooks and His Memphis Stompers, and one number from Friedman’s 1928 band. Allmusic