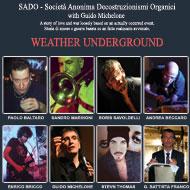 The SOCIETA A.D.O. (SOCIETA ANONIMA DECOSTRUZIONISMI ORGANICI) The SOCIETA ANONIMA DECOSTRUZIONISMI ORGANICI (S.A.D.O.) was gradually developed as a free / experimental / avantgarde Jazz project in Vercelli. It began in 1994 with three fragments from ARCANSIEL – Gianni OPEZZO, Paolo BALTARO, and Sandro MARINONI (tenor saxophones, flutes, trombones) and a percussionist Diego MARZI Their first album, “Implosioni”, was released in 1994. The second album, “Teratoarchetipia”, was released in 1995. While they were performing in Italy and other European countries, “La Differanza”, their 2000 album, was released. All of their releases were on KMP label. After a seven-year silence, they have been more active since their formation. They released “Holzwege” via AMS in 2007. They had a great 2008, when they performed on the stage called “Un Imprescindibile momento Di Cultura Italiena”. In the next year, their performance was recorded under the same name and they were named as the winners of the twelfth editions of “Omaggio Demetrio Stratos” and “Premio Darwin”. They reissued “La Differanza”, a special edition, on Banksville Records. In collaboration with Guido Michelone, Franz Krauspenhaar, they also released “Weather Underground”, which earned them the title of “Best 2010 Production” in the 2010 edition ProgAward.