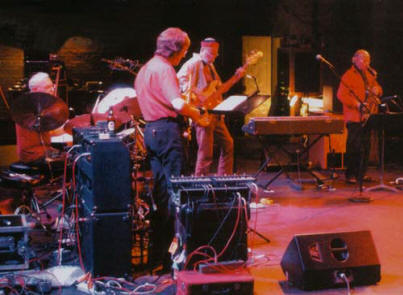 Soft Machine’s ex-members reunited as Soft Works on this 2003 album. The set consists of loosely conceived pieces. Although Soft Works’ roots are in the late-’60s and early-’70s prog rock-based Canterbury Scene era, the band covered many genres during its time. The long-standing relationship between this well-known band and its bassist Hugh Hopper, Elton Dean (saxophonist), and John Marshall (drummer) is something that is highly regarded. Guitar legend Allan Holdsworth recorded and performed with the group in the mid-’70s, early ’80s. This eagerly awaited outing should be a warm welcome to all who have followed the Soft Machine/Soft Works legacy among many other offshoots over the past several decades. The quartet’s Abracadabra album reworks some Elton Dean songs, including a number from his Moorsong CD. It also includes Phil Miller’s “K-Licks” piece, which is a tribute to the guitarist. With Holdsworth’s guitar moves that are “synthaxe-based”, the musicians enjoy electrifying and spacious jazz music. The proceedings are anchored by Holdsworth’s well-designed chop chords, accentuating progressions, and other cleverly designed elements. Due to his gritty and hard-edged alto and saxello lines, Dean shows quite a lot of muscle. Many of these works feature slowly climactic cadenzas that are supported by Marshall’s well-executed rhythmic maneuvers and Hopper. Holdsworth, however, conveys his famous, doomsday chops. However, the music sometimes quietens down, while the instrumentalists occasionally venture into the free zone. On Dean’s “Willie’s Knee,” they give off a spunky, straight-four vibe. Many of the album’s highlights can be found in the soloists’ synchronic exchanges and their ability to run on all cylinders when necessary. Allmusic