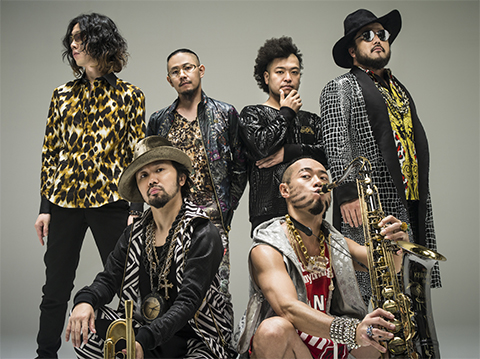 Soil & “Pimp” Sessions is an energetic Japanese club jazz band that have started to receive international recognition. The band consists of six members: Shacho (“agitator”), Tabu Zombie (trumpet), Motoharu (sax), Josei (keyboards), Akita Goldman (double bass) and Midorin (drums). The band was born out of Tokyo’s club scene, when Shacho and Tabu Zombie started including live jam sessions in DJ sets. Gradually the other members were invited, the band line up was finalised and the DJ sets dropped. The band’s adrenalin-fuelled live sets started to create a buzz on the Tokyo live scene, and in 2003 they became the first unsigned band to perform at Japan’s Fuji Rock Festival. They were well received there and in the following months record companies were scrambling to offer contracts. JVC Victor won the battle, and summer 2004 saw the release of the mini-album “Pimpin'”. The album was a critical and, for a jazz release, commercial success, and this together with constant touring paved the way for the release of their first full album, “Pimp Master” in early 2005. The album captures the sheer power of their live performances as well as higlighting their individual musical talents. Two tracks in particular, “Waltz For Goddess” and their cover of “A Wheel Within a Wheel”, caught the attention of DJs abroad, they began to receive heavy air-play on Gilles Peterson’s Worldwide radio program on BBC Radio 1 in the U.K. Summer 2005 was a busy time for the band, with the release of their second mini-album, “Summer Goddess”, and their first live dates outside Japan. Gilles Peterson invited them to play at Cargo in London, and Jazzanova invited them to play in Berlin. They spent the rest of the year, touring in Japan and Europe, and they were also featured in the live broadcast of the Gilles Peterson Worldwide Awards in 2005, where they were awarded the John Peel Play More Jazz Award. A second full album, “Pimp of the Year”, was released in spring 2006, showcasing sounds that showed a development of their sound, as well as one or two tracks that marked a new departure. 2006 has also seen the official release of “Pimp Master” in Europe on Compost Records and the UK on Gilles Peterson’s Brownswood Recordings label. They have continued touring constantly throughout the year, taking in Britain, Italy, France, Belgium, Germany, Slovakia and Croatia, as well as an appearance at the Montreux Jazz Festival. March 2007 saw the release of their third full album, “PIMPOINT”, under the Victor Entertainment label, the album features thirteen solid tracks that follow suit with SOIL & “PIMP” SESSIONS unique heavy jazz sound. Soil & “Pimp” Sessions song ‘Paraiso’ is the opening theme for the anime Michiko to Hatchin. “Agitator” Shacho announced during their performance at the Relentless Garage in London that their latest album 6 is due for release on the 26th of April, 2010 in the United Kingdom. No other release locations were confirmed by him at the time. from http://ibis56.blogspot.com