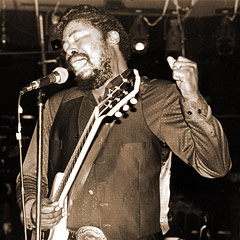 Son Seals was born August 13, 1942 in Osceola (Arkansas), USA and died December 20, 2004 in Chicago, Illinois, USA. He was an American singer and guitarist of the electric blues. Son Seals is a legend in Chicago and the blues. His stature as a blues legend grew with every album that he released, starting with his debut record, which he recorded as an artist fully formed and mature. The blues lost a significant voice when he died in December 2004. When guitarist/vocalist/songwriter Frank “Son” Seals unleashed his debut Alligator recording in 1973, his feral guitar work, scorching vocals and innovative songwriting immediately marked him as one of the major blues voices of his generation. Many young blues players at the time were just covering popular blues songs. Son was a pioneer, writing much of his own material, and playing his guitar with an intense, raw intensity that is only matched by his fierce vocals. Seals was born in Osceola in Arkansas in 1942. He grew up in the blues. He grew up in a few rooms at the back of Jim, his father’s juke-joint, The Dipsy Doodle. This juke joint is famous for its blues and dice. Son was able to hear the blues from his bed almost every night before he started walking, thanks to musicians like Sonny Boy Williamson and Albert King. Son was inspired by his father Jim, despite all the great bluesmen in the house. Jim Seals was a musician who had previously played trombone, guitar, and drums. He also toured with the Rabbit Foot Minstrels which were the training ground for Ma Rainey, Bessie Smith, and was a pianist, trombone player, guitarist, and drummer. Jim was a very well-known musician and was able draw the greatest names to his club. Jim was there to help Son learn the right way when he decided to be a musician just like his father. Son recalls that his father taught him everything right from the beginning. “Tuning and fingering. He would keep me focused on one chord for hours until I could feel it in my sleep, instead of me riffing up and down the neck. I would get up in the morning and grab my guitar to play that chord. Seals, who was 13 years old, was an accomplished drummer and supported many artists through The Dipsy Doodle. He was 18 and was already leading his own band, playing guitar during the week and drumming behind his father on weekends. In 1963, Seals began touring with Earl Hooker as a guitarist and soon became a drummer for Albert King (with whom he recorded Stax’s seminal album Live Wire/Blues Power). In 1971, he moved to Chicago and began playing with everybody from Junior Wells and Hound Dog Taylor to James Cotton to Buddy Guy. Son assumed the weekend Hound Dog Taylor’s Alligator debut record and began touring. The Son Seals Blues Band was Seals’ first album. It established him as an innovative new blues artist. Son began touring the country, performing at clubs, festivals, and colleges. His audience grew. Midnight Son, Son’s 1977 album, was his breakthrough. Every major music magazine praised the album. Rolling Stone called it the “most significant blues album of the decade.” Robert Palmer wrote in The New York Times that Son was “the most exciting young singer and guitarist in blues in years.” Seals started regular European tours on the back of Midnight Son. He even appeared in an ad for Olympia beer on national television. Through the 1980s and 1990s, a strong series of six more Alligator releases was followed. This increased Son’s popularity from a few hundreds to many thousands. Critics loved him. “Excellent modern blues,” exclaimed Blues