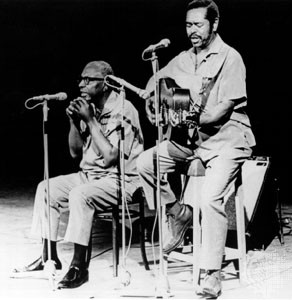 The folk-blues duo that was popular during the revival of the ’50s and ’60s recorded and toured for almost 40 years. Sonny Terry’s joyous whoop, which he naturally produced between his raucous harp blasts, was as distinct as any sound. There were only a few blues harmonica players who had as lasting an influence on blues music as Terry. (Buster Brown copied Terry’s whoop and all). Terry also recorded fine urban blues as a guitarist and bandleader, as well as being Brownie McGhee’s long-time duet partner. Saunders Terrell was born to a folk-styled harmonica player, who performed at local dances. However, blues was not part of his repertoire. He blew reels and did jigs. Terry was not born blind. He lost one eye at five years old and the other at 18 years. He was left with very limited options to make a living so he started walking the streets with his harmonicas. Terry joined hands with Blind Boy Fuller, a Piedmont pioneer. He recorded his first album in 1937 for Vocalion. Terry’s talents were highlighted in 1938, when he was invited to perform at Carnegie Hall’s From Spirituals to Swing concert. In 1940, he recorded his first commercial sides and recorded for the Library of Congress. Terry had met McGhee back in 1939. After Fuller’s death, they joined forces and played together on a McGhee date in 1941 for OKeh. They settled in New York in 1942 as a duo. They made their way into folk music, playing alongside Josh White, Leadbelly, and Woody Guthrie. Although Brownie McGhee was prolific in the studio in the mid-’40s Terry was less successful as a leader. Perhaps Terry’s prominent role in Finian’s Rainbow, which he played on Broadway for two years starting in 1946, was the main reason. Asch and Savoy had sides in 1944, before Capitol recorded three great sessions in 1947. The first two featured Stick McGhee on guitar, while the second one was in 1950. Terry produced some great sides in an R