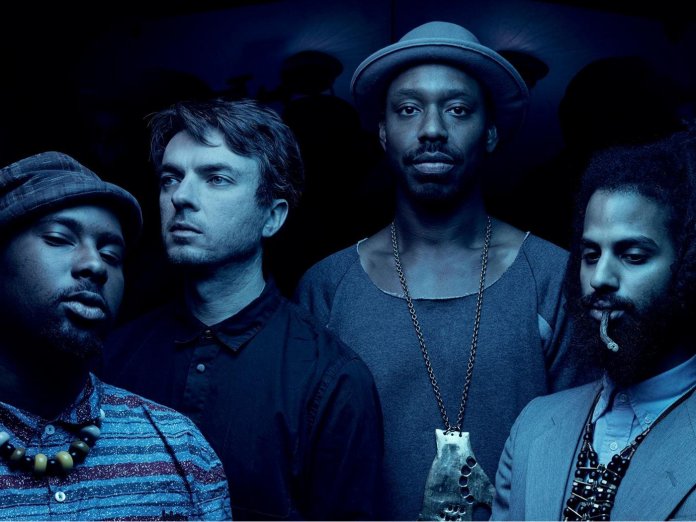 Sons of Kemet is a supergroup of Caribbean and Afro-inspired jazz musicians. They have two drummers and also feature tuba and woodwinds. Sons of Kemet is a U.K.-based supergroup that brings together four musicians from all over the world. This project was started in spring 2011 by Shabaka Hutchings (saxophonist and clarinetist), Oren Marshall (tuba), and Seb Rochford (percussion and drums). The first concert was well received by a large audience of jazz enthusiasts at Charlie Wright’s International bar in London. Sons of Kemet’s sound was created over a long period of practice and searching. It was largely due to Hutchings’ research, drive, passion, and perseverance. Born in London, he spent most of his childhood in Barbados where he learned the clarinet and was a member of a number of calypso- and reggae groups. He returned to the U.K. and studied at the Guildhall School of Music. He discovered that free jazz was as easy for him as swing. After some time, he decided to explore his own individuality and give his music a Caribbean flavor. He returned to Barbados, where he studied with ethnomusicologists who were specialized in Caribbean music. Hutchings mentioned that he was influenced by jazz musicians Cedric Imbrooks and Count Ossie during this period. Seb Rochford, the drummer, is perhaps Sons of Kemet’s most prominent figure. He was a session musician for David Byrne and Herbie Hancock as well as his own projects Polar Bear, Acoustic Ladyland and the Mercury Award-nominated Basquiat Strings. Skinner was also busy and took part in sessions for Matthew Herbert, Malatu Astatke and Eska. Marshall was a long-standing member of the Oren Marshall Trio, as well as in many big jazz bands and as a session musician on film and television. Burn, Sons of Kemet’s first album, was released in 2013. The same year, the MOBOs jazz award was presented to the Sons of Kemet. The album Lest We Forget what We Came Here To Do was released in 2016 to wide critical acclaim. Brass Mask’s tuba wizard Theon Cross has replaced Oren Marshall. Allmusic