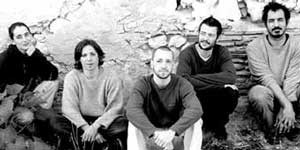 Instrumental chamber rock/zeuhl/R.I.O. Ensemble from Bordeaux, France Sotos was founded in January 1996. The group was formed by five young musicians, who were all students at the French National School of Music. Their first album, which was released by French Gazul in 1999, received strong reviews. Platypus was recorded in 1999 by Bob Drake, a noted engineer who has worked for NeBeLNeST and Thinking Plague. The well-recorded and balanced sound allows you hear the rich and complex sounds. Platypus will be a great release for fans of Igor Stravinsky and Magma as well as other contemporary composers and ensembles. There is still so much to do in this area of music.