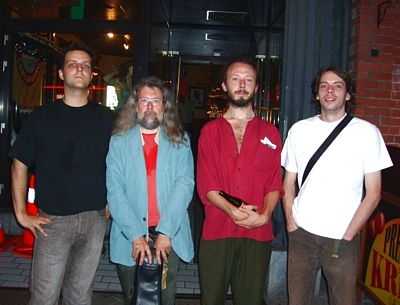 Markus Stauss’ “broken Consort” was resurrected on AltrOck in 2013 as a fiery avant-jazz quintet after four albums. Markus Stauss, a Swiss saxophonist, founded the Spaltklang quartet, which he has been a leader and participant in various avant rock and free jazz ensembles since the 1970s. Spaltklang, which roughly means “split sound” in German, is a reflection of Stauss’ desire to form a 21st-century version of the Baroque era “broken conssort”, which is a group that includes both string and wind instruments. Although combining strings and winds is not revolutionary, Spaltklang’s unique approach to blending musical traditions, and not just different families of instruments, was quite remarkable. Spaltklang featured Stauss as tenor and soprano alto saxophones. Remy Strauli played drums and keyboards. Olivier Vogt played viola and violin. Stephan Brunner was on electric bass. Although the quartet was initially able to put its stamp on music performed by other Stauss groups, such as avant-jazz-rock band Uberfall and free jazz fusion trio Ulterior Lux, which also featured drummer Strauli, they soon developed a unique voice, creating new arrangements and improvisations. In 2002, Spaltklang released Alpengluhen, its debut album. The album featured a variety of musical elements, such as a probing collective improvisation and angular jazz-rock that is highlighted by Stauss’ squalling alto sax. Vogt’s violin and soprano sax are also included. Jazz-funk is driven by Strauli and Brunner’s tight rhythm section. (Bassist Brunner explores some Hugh Hopper-style fuzzbass). The quartet of Stauss and Strauli, Vogt and Brunner would release three more albums in the 2000s. They were all released by Fazzul Music, including En Suite (2009), Lontano (2006) and Surprise (2004). Spaltklang seemed to be entering a new era, with lineup changes. The group would become a sextet consisting of Stauss and Strauli, Vogt as well as new bassist Christian Weber (replacing Stephan Brunner), Jerome Koopmann and Ruedi Schim. This band was unable to launch as an ongoing viable project due to the commitments of its members. Spaltklang ended their hiatus in 2012. Stauss was also in the AltrOck’s orbit, having participated in recordings of a variety of AltrOck projects including Yugen’s avant-prog group, ambient explorers Kurai and Finnegans Wake, belgian-brazilian chamber experimentalists. Francesco Zago, Yugen guitarist/composer, had met Stauss in 2005. The two formed the improvisational duo Zauss. In 2006, Fazzul released a debut album. This year also saw Spaltklang’s third album, Lontano. Stauss’ appearances on Yugen’s debut album, Labirinto d’Acqua, followed by a second album in 2011, and a third in 2012. Stauss and Zago had established a strong collaborative relationship and Stauss was already part of the AltrOck family. Spaltklang would soon resurrect as an AltrOck band with Zago as the new guitar player. In Between, the fifth album by Spaltklang, was recorded in February 2013 by this quintet. AltrOck released the album in February 2013, clearly indicating new directions for Spaltklang in jazz-rock and avant jazz and creative improvisation. It featured Stauss and Strauli on double bass, Strauli and Weber on trumpet, and Richard Koch, an Austrian trumpeter. Allmusic