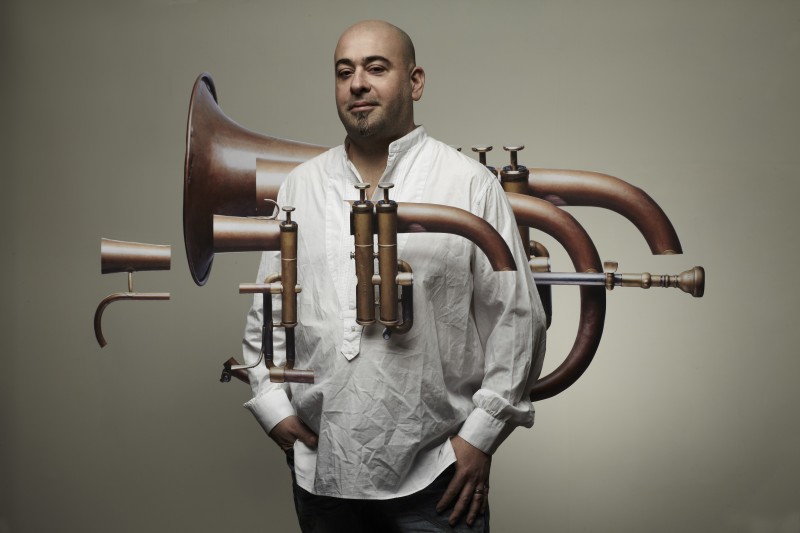 Stephane Belmondo, born Hyeres (Var, July 8, 1967), is a French jazz trumpeter and flugelhornist. Recordings with his brother Lionel Belmondo, Yusef Lateef and him in 2005 won the L’Album Francais de la l’annee in France, 2004, 2005 and 2005. He also received the best artist award (L’Artiste ou la Form instrumentale de la francaise) in 2003 and 2004 in the French Victoires du Jazz. He is also known for his tribute albums, which feature the musicians being honored. Stephane’s music was a natural gift according to his family, the Belmondos. His father, Yvan was proud of Stephane but rigid when it came to musical education. He was a former professional musician and saxophonist so he knew the importance of practicing music and being disciplined. These values were instilled in his son at an early age, and Belmondo adopted them quickly. At the age of six, he began playing drums and percussion instruments. He then switched to accordion at eight years old. At ten, he took up the trumpet. Belmondo studied accordion, cornet and music theory at the Aix-en-Provence Conservatory of Music. He was then admitted to the Marseille Conservatory’s trumpet class at 16. Belmondo was just 14 years old when he took to the stage with his accordion and joined the big band that included his brother Lionel, who played the saxophone. Belmondo was just 15 when he and his brother formed a quintet. In 1986, Belmondo won his first trumpet prize in Marseille. He arrived in Paris to pursue his career and met Rene Urtreger who allowed him to share the stage with Niels-Henning Orsted Persen, a double-bassist. Al Levitt and Pierre Michelot were also among his many collaborators. He joined Laurent Cugny’s big band Lumiere in 1987, just after his arrival to Paris. Cugny had convinced Gil Evans, an arranger, to visit France to work on the orchestra’s repertoire. Two albums, Rhythm-A-Ning, and a European tour were the result of this collaboration. Belmondo recorded and performed on both these albums. [5] He played with Pierre Boussaguet’s bassist and pianist Kirk Lightsey, and his brother Jacky Terrasson’s quintet. An album entitled Jazz aux Remparts was released by Boussaguet, featuring Tom Harrell, an American trumpeter. Belmondo was a member of Michel Legrand’s orchestra and participated in the 1992 Olympia concert, where Legrand and Stephane grappelli were together for the first-time. He was part of the 1992 album Legrand/Grappelli, which he recorded with Grapelli and Legrand. He toured the globe with them. Belmondo was a member of Dee Dee Bridgewater’s trio in 1994 and recorded Love and Peace in 1995 with them, which featured Jimmy Smith. Belmondo also moved to New York City that year. Dee Dee Bridgewater continued to tour the US with him, including performances at the Newport Festival as well as the Carnegie Hall. He played with many musicians during his time in New York, including Al Foster and Mark Turner, Lew Takin, Donald Brown, Franck Amsallem, and Lew Tabackin. He recorded with Donald Brown, pianist, and his quartet at the Blue Note. Belmondo, Jean-Louis Rassinfosse, and Philip Catherine, Baker’s former partners, performed at the Blue Note in 2002 to celebrate the 15th anniversary of Chet Baker’s death. He returned to Paris in 2004 to record his first solo album Wonderland, which he interpreted a collection Stevie Wonder songs. In 2005, this album won Belmondo two Victoires du Jazz in France awards. Belmondo met Yusef Lateef, a flute and saxophone player, and together they made Influence (2005). His group, which included Yusef lateef, began touring Europe and the rest of the world shortly thereafter. Belmondo recorded in 2008 with Milton Nascimento, a great Brazilian singer. They toured together. Selmer also marketed new trumpet and bugle models to Belmondo under the name Concept TT. From Wikipedia