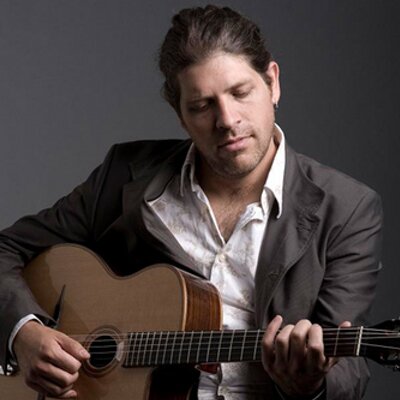 Wrembel was born in Paris, and raised in Fontainebleau (the home of Impressionism, Django), at the age four. He first learned classical piano. He says that his teacher was a well-known musician. She was very old school, but she taught me how interpret and make phrases from beginning to finish. “My entire classical training, from the ages of 4 to 16, was about how to interpret.” Wrembel discovered he had a passion for guitar in his mid-teens. He says, “I began practicing very intensely.” “I was a huge Pink Floyd fan. That is still my favorite music. I spent hours studying David Gilmour’s music. I became a professional musician when I was 17. After I received my high school diploma, I realized that I needed to practice for 18 hours each day. I came from a classical background and a love for rock music. I discovered Django. “I fell in love with his very strong impressionist sound in his music.” Wrembel spent a lot of time in Gypsy culture to expand his musical knowledge and gain experience. He says, “When I started going to the camps, I realized that music was not just the notes.” It has an atmosphere. It was there that I learned the true meaning of Sinti-style guitar playing. You can play non-stop all day in the camp. Technical things are not taught in the camps. Culture doesn’t have names for things, they just practice melodies. You can become captivated by playing, playing, and more playing. “The music just happens by itself.” Wrembel was able to identify where he wanted his career to take him to the forefront of forward-thinking, expert players. In 2000, he enrolled at Boston’s Berklee College of Music. He graduated two years later. Wrembel then moved to New York in 2003. The big question now was how to make a living doing the things he loves. He says that most musicians come to New York looking for work. They don’t have the time or money to practice, so they have to rely on someone else for their income. I arrived without any money and said that I needed to get it. How can I do that? I called every restaurant and club in New York. With my rhythm player, I went to every single one. We talked with the owners and played guitar. We would then get the gig.” Word quickly spread about this extraordinary European transplant among musicians and other New Yorkers. Vintage Guitar magazine reviewed Stephane Wrembel’s 2002 debut album, Introducing Stephane Wrembel. It was praised as “pure dash and dash,” a torrent of notes that envelopes the melody with arpeggiated notes. The 2005 release of Gypsy Rumble also received praise from critics. Time Out New York stated that the latter “shows Wrembel’s limber chops at a variety of settings including ebullient French Gypsy Swing, moody ballads and a lithe rendition of Mongo Santamaria’s ‘Afro Blue’.” Woody Allen used “Big Brother” from the album in Vicky Cristina Barcelona (2008). Wrembel released his fourth album, Terre Des Hommes that same year. Wrembel’s recordings have made a big splash. He has also dazzled audiences at major events such as the High Sierra Music Festival (Berkshire Mountain Festival), Whistler International Music Festival (and many other venues) and Lincoln Center. Wrembel also started the Django A Go-Go Festival where he and others who were influenced by Reinhardt will celebrate the Sinti style of the guitar. Wrembel loves to pay homage to his roots, hence the title of his fifth album Origins. He was delighted to oblige Allen’s producer when he requested “a work that reminds of the magic Paris” for his Oscar-winning Midnight in Paris. However, he is not bound to his past. Origins covered everything, from blues to flamenco and rock to create a unique genre called Stephane Wrembel. from www.stephanewrembel.com