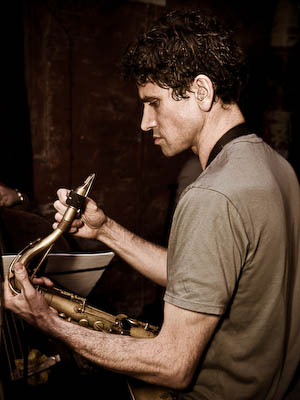 Stephen Gauci is a well-known saxophonist on the New York City improvised jazz scene. Gauci, who was left hearing impaired from a childhood illness, fell in love with the clear and deep tone of the tenor Saxophone. This was the beginning of a long-lasting relationship and exploration of tone, timbre and voice. Gauci’s hearing loss is so severe that he must be able to concentrate and stay focused on outer sounds. However, the flip side is that inner sounds and the inner voice are magnified, making them crystal clear and singing. Gauci’s hearing loss has caused an intense focus to be directed inwardly, illuminating and expressing the inner voice. Nels Cline and Karl Berger are just a few of the musicians Gauci has performed with. Gauci has released 16 records as a leader over the last ten years. He has appeared at the Creative Improvised Music Festival in Austria, Rochester International Jazz Festival in New York, High Sierra Festival in California, Earshot Jazz Festival and Vision Festival in New York. He has toured Europe, including Sweden, Germany and Austria as well as France, Hungary, Hungary, and Portugal. Jazzrightnow.com