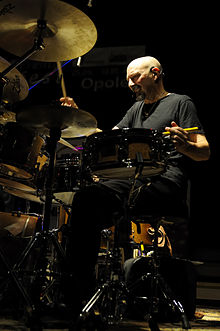 Steve Elliott Smith, an American drummer, was born in Whitman, Massachusetts, on August 21, 1954. He is best known as the drummer for the rock band Journey’s peak years. Five years running, Modern Drummer magazine readers voted Steve the #1 All-Around Drummer. Modern Drummer named Steve one of the 25 greatest drummers of all time in 2001. In 2002, he was elected into the Modern Drummer Hall of Fame. Smith started studying drums at nine years old with Bill Flanagan, a local Boston teacher who was a member of big swing bands. Smith was a member of the school and garage bands, but he also started to perform in professional concert bands and in the big band at Bridgewater State College. After graduating high school, Smith attended Berklee College of Music, Boston, Massachusetts. Smith was the drummer for the Focus album Focus con Proby. He also drummed with Ronnie Montrose. Smith joined the Journey rock band in 1978. From late 1978 to mid-1985, he occupied the drum seat. Smith quit the band in 1985. However, he returned to the band for their 1996 return album, Trial by Fire. He also played in the Journey offshoot, The Storm. He was also a session musician for pop stars like Mariah Carey and Vasco Rossi. He has also played with many jazz musicians, including Wadada LeoSmith, Tom Coster’s Steps Ahead and Ahmad Jamal. Smith is also the leader of Vital Information, a jazz group. Neil Peart, Rush drummer, invited Smith to perform on a tribute album to Buddy Rich. This album was dedicated to Buddy Rich, the legendary drummer who influenced both drummers’ careers. Smith performed “Nutville” and was invited back to perform on the second tribute album, Burning for Buddy, A Tribute To the Music of Buddy Rich Vol. 2 where he performed “Moment’s Notice”. Modern Drummer magazine named Smith one of the 25 greatest drummers of all time in 2001. He was inducted into the Modern Drummer Hall of Fame the following year. His Hudson Music DVD Steve Smith Drumset Method – History the U.S. was released in 2003. Beat was named the #1 Educational DVD in 2003. Smith also recorded two albums with Buddy’s Buddies (a group of Buddy Rich alumni) and released two CDs under the Tone Center label. Both were recorded live at Ronnie Scott’s, a famous London jazz club. They are Very Live at Ronnie Scott’s Set One