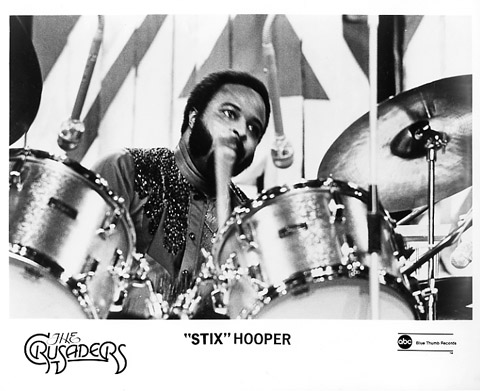 One of the original Jazz Crusaders, Stix Hooper remains a well-respected drummer although his own solo career has mostly found him in fairly anonymous settings. He started playing drums early on in his native Houston. When he was 16 he put together his own group, originally known as the Swingsters. Later on the group changed its name to the Modern Jazz Sextet, the Night Hawks, and by the late ’50s the Jazz Crusaders. Trombonist Wayne Henderson, tenor saxophonist Wilton Felder, and pianist Joe Sample became co-leaders of the quintet (which had a variety of bassists through the years). The band’s unusual trombone/tenor front line and its ability to play soulful hard bop kept it popular and generally creative throughout the 1960s. In 1971 the Jazz Crusaders became the Crusaders and soon Henderson dropped out and the music became more R&B-oriented. Hooper stuck with the group until 1983, when his departure signaled the beginning of the end since his distinctive drumming was a large (if underrated) part of the band’s sound. Stix Hooper, who led rather routine albums of his own for MCA and Artful Balance in the 1980s, has made occasional guest spots on other dates, including sessions led by Grant Green and George Shearing. At the close of the new millennium’s first decade, the drummer established Stix Hooper Enterprises and released three CDs under that imprint: Mainstream Straight-Ahead, Jazz Gems, and Many Hats. from allmusic