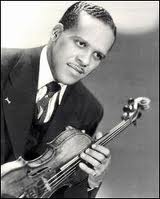 Stuff Smith, Joe Venuti, and Stephane Grappelli were the pre-bop’s big three violinists. Many of his admirers said that Stuff could outswing any of his competitors and was certainly a major player on the bandstand. Smith, who named Louis Armstrong as his primary influence, studied music with him father and was a member of the family band as an infant. He made his first recordings and had a major job with Alphonse Trench’s territory band in 1920s. But it wasn’t until 1936 that Smith saw his breakthrough. Smith led a quintet that performed at the Onyx Club, along with Jonah Jones, and his comedy vocals and hard-swinging style made them a success on 52nd Street for many years. His novelty “I’se a Muggin’” became a huge hit. Smith was a regular collaborator with his trios during the 1940s. However, Smith was at risk of being forgotten when Norman Granz recorded him extensively for Verve. Stuff also took part in Nat King Cole’s After Midnight sessions for Capitol. In 1965, Smith moved to Copenhagen as a violinist and remained active until his death in 2002. Allmusic